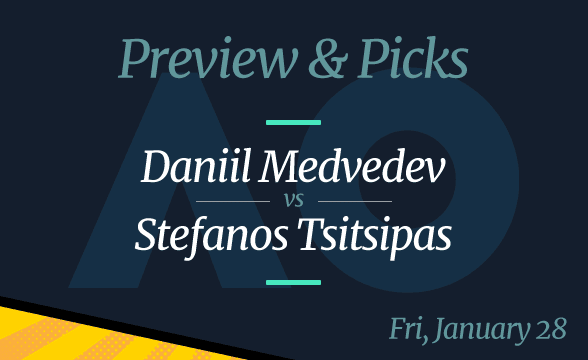 Stefanos Tsitsipas is locking horns with Daniil Medvedev in the semifinal of the 2022 Australian Open this Friday. The winner of the match will go into a battle for the title against the winner of the Rafael Nadal vs Matteo Berrettini match.

So, who’s it going to be – Tsitsipas or Medvedev?

The 23-year-old Greek put on a fabulous performance on Wednesday in the quarterfinal clash with Jannik Sinner. Tsitsipas destroyed his opponent in under two hours, winning in straight sets and losing just nine games. No other player who made it to the final four of the tournament did as well in the quarterfinal. For instance, Medvedev lost 29 games to Felix Auger-Aliassime in the quarterfinal.

What this means is that Tsitsipas has confidence on his side, not to mention that he’s probably doing much better physically than his opponent who had to stay on the court for nearly five hours on Wednesday.

What’s worrying Tsitsipas is that his record against elite players isn’t that great. The guy is still without a single Grand Slam title in his collection, although he did come close to winning the 2021 French Open. If it weren’t for Djokovic, he’d won that tourney.

Another concern for Tsitsipas is that his record against Medvedev is far from good. He’s 2-6 against his Russian foe, but the good thing is that both of those wins happened in their previous three meetings.

Even though Medvedev is famous for his endurance, the marathon match with Auger-Aliassime surely didn’t do great for his fitness. The match lasted for four hours and 38 minutes, which is his longest match since September 2019 when he lost to Rafa Nadal 3-2 after 4:45 hrs.

The fact that he struggled in the quarterfinal has probably made his confidence drop. This goes especially because Medvedev didn’t do too great in the previous Australian Open matches either. For instance, he spent 3:30 hrs. on the court in Round 4 against Maxime Cressy whom he defeated 3-1 in the end.

Nevertheless, oddsmakers still see the world no.2 as a clear favorite in the semifinal match. The Russian surely has the skills to qualify for his second straight Australian Open final. However, physically and emotionally, the Greek player has an advantage.

On top of everything, you can be sure that the crowd at Rod Lever Arena will be rooting for Tsitsipas. They don’t seem to like Medvedev anymore after the Russian called them “low IQ audience”.

Las Vegas Sands Fights Back Against $7-Billion Lawsuit in Macau