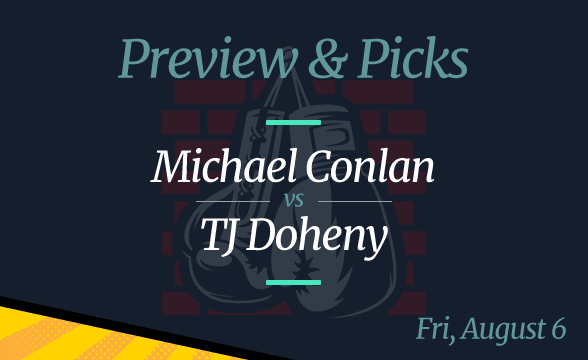 Michael Conlan will take on TJ Doheny at Falls Park in Belfast, Ireland, on Friday, August 6, 2021. The fight will be broadcast on ESPN+ and prove an important bout for both fighters who are looking to secure the WBA interim featherweight title.

One fighter is coming into the fight as the clear favorite, and that is Conlan, who is priced at (-600) presently. He is also the younger contender and has not been defeated for 15 straight fights. Let’s take a look at the odds.

Where and When to Watch Conlan vs Doheny?

As you can imagine, Conlan is an almost undisputed favorite for this one. He’s priced at (-600), and he has the track record to prove that the oddsmakers didn’t make a mistake. Conlan repeatedly took on some of the most notable opponents out there, and his wins include fighters such as Sofiane Takoucht and Ruben Hernandez.

Admittedly, the fight against TJ Doheny will be another big milestone in his career, and outside of his fight against Takoucht, he has not faced another opponent who is as experienced in boxing.

Conlan shows the strength and commitment that few other fighters have. He has been able to bring in 15 victories in total, eight of which with a KO and all of this in less than four years of professional boxing. He has the stamina, reach, and attributes that make him the clear favorite in the upcoming bout.

Colan vs TJ Doheny Tale of the Tape

What to Make of TJ Doheny

Perhaps Doheny’s own career has not been as quick as his opponent’s. Colan is closing in the distance between him and Doheny in just a few years. It took Doheny eight years to set up 24 fights.

Yet, dismissing Doheny would be a grave mistake, and when he is given odds of (+400), you can see how this is a great boxing betting value if the fighter manages to bring the fight home.

It’s also important to note that Doheny fought fighters that have had more experience boxing than Conlan. He defeated both Martinez and Roman, he took on Mike Oliver and Pipat Chaiporn and won against all. He most notably took down Sutep Wangmuk, a fighter with over 68 bouts in his career, and four losses.

Doheny is a long shot, and Conlan is definitely a very talented boxer, but when the odds seem to give you such a great opportunity, it seems at least wise to consider placing a bet on Doheny on the moneyline.

Bookies.com Partners with Matchroom Ahead of Lopez vs Kambosos Jr.

Sports wagering news, expert picks and betting guides provider Bookies.com has unveiled a partnership with the sporting event promotions company Matchroom ahead of the boxing match between Teofimo Lopez and George Kambosos Junior. A Boxing Event to Remember The agreement will see Bookies.com as the official betting partner of the lightweight clash between the unified […]

A new investigation led by Professor Richard McLaren discovered that boxing bouts during the 2016 Rio Olympics were impacted by match-fixing. The investigation was initiated by the International Boxing Association and found malpractices conducted by judges and referees. Boxing Integrity Impacted during 2016 Olympics According to an Investigation Results of a new investigation were released […]

Tyron Woodley lost his fight against Jake Paul on Sunday last week. Now, the question is who Paul, aka The Problem Child, will face next. Winning against Woodley marked Paul’s fourth win as he keeps his record clean with no losses. Jake Paul Wins against Tyron Woodley An exciting pay-per-view fight took place Sunday. The […]

Where and When to Watch Canelo Alvarez vs Callum Smith? Live Stream, TV Schedule, Time