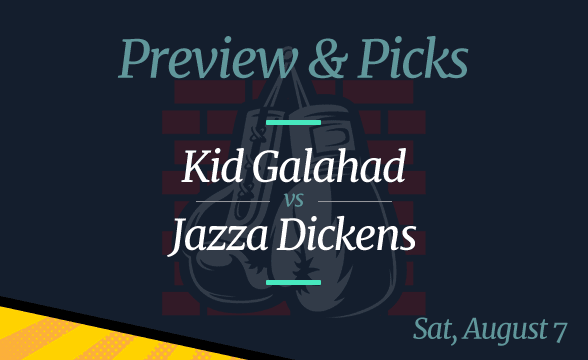 Kid Galahad will be fighting Jazz Dickens at Matchroom Headquarters in Brentwood, Essex, on August 7, 2021. The fight is scheduled to take place at 12 pm EST, and it will be a continuation of the previous bout between the two.

You will have an opportunity to place your bet today and see if it pans out. Clearly, one fighter is coming in as a heavy favorite, and that is Galahad. Yet, there are many moving parts in this upcoming bout, and you would do well to consider them all.

Galahad vs. Dickens Odds to Win

Galahad vs Dickens Time and Date, Where to Watch

Kid Galahad Comes in as Favorite

It’s definitely not surprising that Kid Galahad is looking to win another bout on Saturday, especially when his upcoming fight is a rematch with Dickens. Galahad is priced at (-350), giving him a fairly good chance of succeeding too, and not least because of his impeccable record.

He has suffered a single loss and fought in 27 bouts so far, concluding 16 of them with a KO. This fight is even more important for him as it will focus on winning the IBF world featherweight championship, which is vacant.

Looking at Galahad’s track record, there are definitely fights that reaffirm his skill and prowess as a boxer. Other than his loss to Warrington, Galahad has not known a single loss. In fact, he went on a 25-winning streak making it one of the longest in the sport.

Galahad has taken out Clary, Berry, and Cayetano. He fought some pretty bad opponents, too, and his career is intertwined with stellar and middling fighters, but it’s how it goes in professional boxing – everyone gets a shot.

To be perfectly honest, though, Galahad took on some of the weaker competitors, although this is the nature of his category, too.

Galahad vs. Dickens Tale of the Tape

Jazz Dickens is priced at (+275) definitely not too bad, and he is riding an eight-win streak after losing to both Ward and Rigondeaux in 2016 and 2017. Even though Dickens has taken boxing at a much slower pace, he has fought some notable boxers, too.

His most recent bouts against Walsh, Wood, and May have been a true test to his mettle and proof that when Dickens wants to, he can really get back to the very top of the sport. However, if he really wants to make up for his loss in fight one, he will have to win the rematch, plain and simple.

Is betting on Dickens a good call here? With Galahad set to win at (-350), it may be a bit of a stretch to back Dickens. Then again, you might want to look into the Totals or Prop Bets for the fight.

Bookies.com Partners with Matchroom Ahead of Lopez vs Kambosos Jr.

Sports wagering news, expert picks and betting guides provider Bookies.com has unveiled a partnership with the sporting event promotions company Matchroom ahead of the boxing match between Teofimo Lopez and George Kambosos Junior. A Boxing Event to Remember The agreement will see Bookies.com as the official betting partner of the lightweight clash between the unified […]

A new investigation led by Professor Richard McLaren discovered that boxing bouts during the 2016 Rio Olympics were impacted by match-fixing. The investigation was initiated by the International Boxing Association and found malpractices conducted by judges and referees. Boxing Integrity Impacted during 2016 Olympics According to an Investigation Results of a new investigation were released […]

Tyron Woodley lost his fight against Jake Paul on Sunday last week. Now, the question is who Paul, aka The Problem Child, will face next. Winning against Woodley marked Paul’s fourth win as he keeps his record clean with no losses. Jake Paul Wins against Tyron Woodley An exciting pay-per-view fight took place Sunday. The […]

Where and When to Watch Canelo Alvarez vs Callum Smith? Live Stream, TV Schedule, Time