Cloudbet has added USD Tether to its list of available coins, making for the first time that the blockchain operator has introduced a stablecoin payment solution.

Blockchain-powered and Bitcoin-based sportsbook and casino operator Cloudbet has added its first stablecoin, allowing players and bettors to now use USD Tether as one of the available coins.

Completing a month of extensive testing with the help of trusted community members, Cloudbet is finally able to rollout the USDT coin, enabling deposits and withdrawals for any interested party.

Commenting on this development, a Cloudbet spokesperson explained that Cloudbet had picked up the pace with new feature rollouts, and specifically owing to the processes put in place that had helped the company release its new, next-generation website, or Cloudbet 2.0.

Reassuring potential stakeholders and community members, Cloudbet’s spokesperson said that the market could look forward to many new features arriving over the next few months.

With Cloudbet releasing its new website in April, the operator saw several significant changes to its offer over the period. Both USDT and Ethereum are among the new currencies Cloudbet users may now tap freely into.

The use of USDT should give community members an additional piece of mind as its value is pegged to that of the US dollar, making the best out of both the established financial order and the advanced technical solutions by the blockchain.

It has been a busy May as well, with the company rolling out an esports product reinforced with in-play betting markets as part of the next-generation website Cloudbet released. As a result, players may now place wagers on FIFA 20 and Counter-Strike: Global Offensive (CS: GO). According to a recent EveryMatrix survey, these two games account for over 90% of all esports betting volume during the lockdown.

In addition, the operator added UFC live betting feature, and has been running daily “Bet of the Day,” tips.

Why Does Cloudbet Need Stablecoins?

While the value of crypto gambling has been touted all over, one issues has persistently worried players and sports bettors – the lack of fixed price. While, a consumer can expect to withdraw the same amount of Bitcoin they have won, the value of the cryptocurrency has been prone to rapid and sudden changes.

However, with the addition of USDT, this issue could be circumnavigated, if not eliminated. USDT is traded at a value of one unit for a USD, which makes it the ultimate betting tool that still can be stored online.

According to Cloudbet’s spokesperson, Cloudbet’s goal has always remained the same, i.e. finding solutions to persistent problems in the industry. During a recent SBC Digital panel, industry experts agreed that brands ought to be leveraging their names more aggressively in order to introduce cryptocurrencies.

Recently, mBitCasino became one of the first to completely drop FIAT currencies. Most blockchain casinos and sportsbooks today use FIAT currencies to facilitate onboarding, but as interest in the sector grows, and new solutions are found to tackle common problems, the need for traditional currency has waned. More work needs to be done still, and Cloudbet’s latest move is a step in the right direction.

Cloudbet Builds up on Crypto Offer with 11 New Currencies

Cloudbet has expanded its payment options list with the addition of 11 new currencies, the company said in a press statement on Tuesday. The latest additions include Shiba Inu, Cardano, Solana, and Binance Smart Chain.  New Cryptocurrencies Available on Cloudbet Cloudbet is a fully crypto-centric casino and sports betting platform that allows consumers to place […]

With Euro 2021 around the corner, Cloudbet has released a fully localized German website to meet demand from German-speaking customers. German Customers Now Feel at Home with Cloudbet Cloudbet continues to expand its offer by launching a dedicated website for German customers just on time for Euro 2021. Focusing exclusively on Bitcoin casino and sportsbook […] 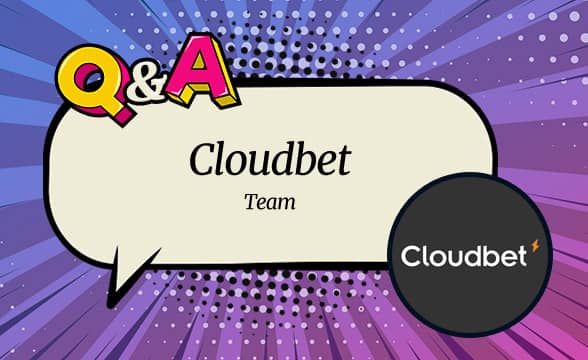 Cloudbet: ‘We’re developing technologies that allow us to take the largest bets that anyone in the world has ever taken’

Chinese authorities have cracked down on an illegal gambling facilitator, arresting 76 suspects and cutting access to over 120 online gambling websites based outside of the country. China Hunts Down an Illegal USDT Gambling Operation China continues with its crackdown on unauthorized gambling operations. In the latest bust, the Public Security Bureau in Huizhou City […]

Three new crypto and blockchain operators have introduced esports in the last two weeks. Cloudbet, BetProtocol, and FortuneJack have all added or extended their esports products. Cloudbet Upgrades Esports Offer with In-play Markets Cloudbet has become the latest blockchain operator to launch an esports product, and specifically introduce in-play betting markets consumers can bet on […]