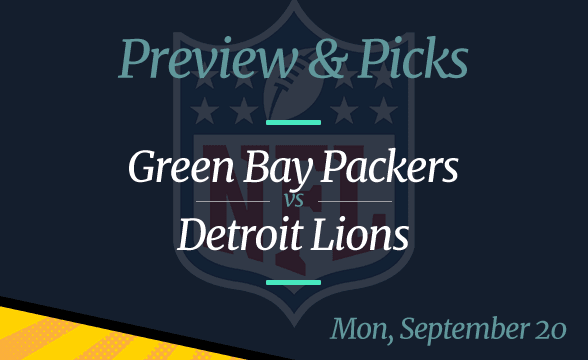 The biggest surprise in Week 1 was the 38-3 loss the Green Bay Packers suffered at the hands of the New Orleans Saints. They were dreadful in literally every aspect of the game, which explains why they suffered their worst-season opening in 51 seasons.

They have a chance to bounce back on the right track with a win in the Week 2 game against the Detroit Lions. The good news is that they will have their fans to cheer them on from the stands of the third-largest NFL stadium.

All odds are per DraftKings as of September 17.

All Eyes on Underperforming Aaron Rodgers

The reigning NFL MVP has always been in the media focus, but in recent times, it’s not because of anything good. Everything started when it became clear that Rodgers wanted out of Green Bay, which made everyone speculate about his future destination. He’s decided to stay put for another season; however, the new season hasn’t started very well. In fact, it started horribly for him.

We saw Rodgers complete 15 of 28 passes for only 133 yards. Furthermore, two of his passes were intercepted by the Saints.

It is needless to say that everyone expected more from him and now everyone is expecting Rodgers to explode in Week 2 against one of his favorite foes, the Lions.

With Rodgers as their QB, the Packers have gone 16-4. He has thrown 43 touchdown passes, with only eight of his throws being intercepted in those 21 games.

The Jared Goff Era Started with a Defeat for the Lions

The Lions lost their Week 1 game to the San Francisco 49ers, which was expected. After all, the 49ers are a much better team than the Lions, especially now that Matt Stafford is no longer with the club. Their long-term quarterback decided to move to California, choosing the LA Rams as his next destination. The Rams’ ex QB, Jared Goff, went the other way around.

The new chapter of Goff’s career did start with a defeat, although he wasn’t too bad in that game. Actually, he was one of Detroit’s best players that day. He completed 38 of his 57 passes for 338 yards and three touchdowns, with just one interception. Does this mean the Lions fans should hope for something similar from him?

Probably, but the big question is whether that’s going to be enough to get a win against the Packers. The thing is that with Rodgers playing as used to last year, Green Bay seems capable of outscoring anyone.

Pick: Green Bay Packers to win, although the spread might be an issue. The game will go over 48.5 points.