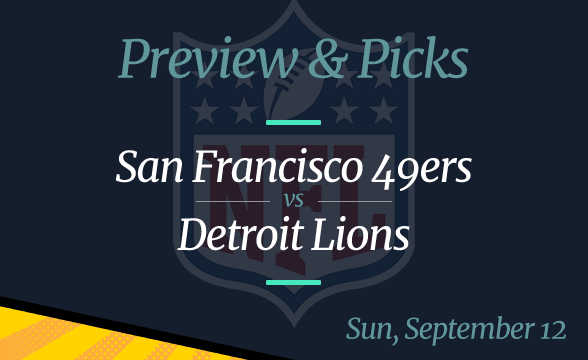 December 6, 2020 – that’s when the Detroit Lions last won a game. Can they put an end to the embarrassing run? Not if you’re asking the San Francisco 49ers, a team that’s coming off a nightmare season, but which has huge ambitions for 2021.

All odds are per MyBookie as of September 8.

Where and When to Watch Cardinals vs Titans

The man who won the 2019 Defensive Rookie of the Year award had to spend most of the 2020 season off the field. The guy in question is Nick Bosa, one of the best defensive ends in the league. The good news is that he’s back again, ready to improve on his 2019 stats.

It’s a similar story when it comes to the 49ers QB, Jimmy Garoppolo. In 2019, he broke several personal records, including passing yards (9,978) and passing touchdowns (27). In 2020, everyone thought he was going to do even better. But, then, he got injured.

Garoppolo’s ankle problems kept him sidelined for 12 games of the 2020 season. The good news for the Niners is that he’s back. He’s been named their starter against the Lions, although Trey Lance remains in the competition.

San Fran’s third overall pick in the 2021 NFL Draft is thought of as one of the most promising rookies in the league. What this means is that the 49ers have nothing to worry about at the QB position. The same, however, isn’t the case for the Lions. In fact, it’s just the opposite – this is going to be the first game in many years without Matt Stafford as their starting QB.

Matt Stafford Out, Jared Goff In

Matthew Stafford remains one of the greatest legends of the Detroit Lions. An elite passer of the ball, he was their crucial player for years. In fact, the guy joined the Lions in 2009.

However, he’s no longer there. Instead, their new quarterback is the former LA Rams signal-caller, Jared Goff. The two teams made a deal to swap quarterbacks earlier this year.

There’s no doubt that the Rams did better in the trade. The thing is that Goff just isn’t a top-class quarterback, despite the fact that (unlike Stafford) he played in a Super Bowl. However, that happened in the 2018 season. A lot has changed since.

Actually, Goff’s disappointing performances in 2020 were the reason why the Rams decided to trade him for Stafford.

Pick: San Francisco 49ers win and cover the spread, and the Under holds up.