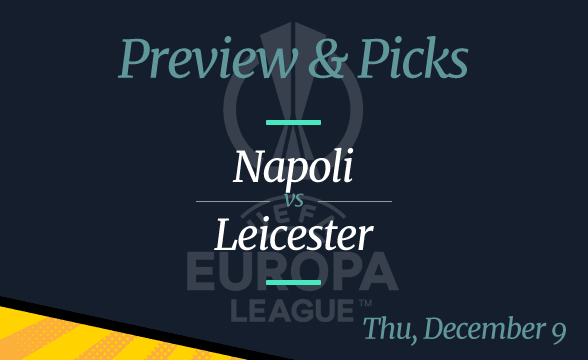 Group C of the 2021-22 Europa League is one of the groups where everything is still pretty much open. Each of the four teams has a chance to get to the knockout stage of the competition.

Ahead of the final round of the group phase, Leicester is at the very top of the table with 8 points. Spartak Moscow is behind with 7 points, which is the same as Napoli. The reason why Napoli is in the #3 spot is that the Italian team has a negative head-to-head record with Spartak.

At the very bottom of the group is Legia with 6 points, meaning that the Polish team too has a chance to get to the next stage.

All odds are per FanDuel as of December 7.

A Must-Win Game for Napoli

The situation in Group C is such that the only way for Napoli to get to the Europa League knockouts is to win on Thursday. The good news for the Italians is that the game is played in Naples, where this team has always been a tough nut to crack.

The bad news is that Napoli players haven’t been in great form. In fact, this team lost three of its previous five games. The most recent of those defeats was the one against Atalanta last Saturday. Even though Napoli played in front of their supporters, the visitors still managed to beat them 3-2.

Napoli does have beautiful memories from their trip to England in September. In the first clash between these two, Napoli managed to hold favored Leicester City to a draw. It was 2-2 at the end, with both of Napoli’s goals scored by Victor Oshimen, their scoring leader this season with 9 goals in all competitions.

Unfortunately for Napoli, Oshimen will not play against Leicester on Thursday due to a face injury. More bad news is that he’s just one in a long list of Napoli players who will miss this game. Others include Lorenzo Insigne, Fabian Ruiz, Kalidou Koulibaly, and so on.

Anything But a Loss Would Suit Leicester

If the Foxes win on Thursday, they’ll get to the knockouts. Even if they draw with Napoli, they will get to the knockouts no matter what. But what happens if they lose? Well, in that case, their destiny would depend on the outcome of the Legia vs. Spartak Moscow game. In that scenario, anything but a Spartak win would suit Leicester just fine.

What all this means is that the English team doesn’t have to worry too much. They can relax and play their game, knowing that it’s very likely they will play in the Europa League next year. However, they probably aren’t going to be completely relaxed. Putting on a good performance and getting a good result is important for their morale.

The thing is that last weekend, they lost to Aston Villa 2-1 in a game they were planning to win. It was one in a series of poor results in the Premier League, which is why they’re now in the bottom half of the table.

Picks: Napoli and Leicester City to draw; under 2.5 goals