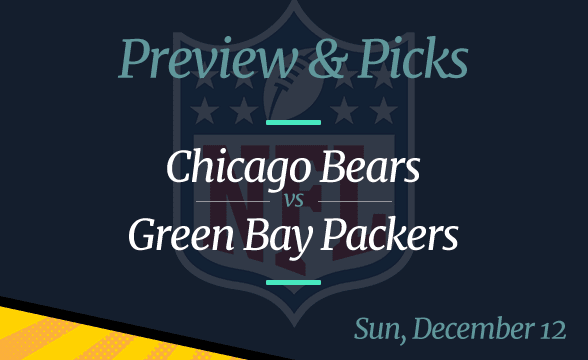 Online sportsbooks think of the Green Bay Packers (9-3) as huge favorites against their divisional rivals, the Chicago Bears (4-8). They are giving a spread of 13-points, which is the highest line the Packers have had in the 2021 season. Are sportsbooks right to think Green Bay will get a blowout win or a harder task is awaiting Matt LaFleur’s boys? Keep reading our preview to find out!

All odds are per FanDuel as of December 7.

Chicago’s Anemic Offense Is in Trouble

The Bears are 4-8 on the season, meaning that their chances of getting to the postseason are very, very slim. It’s not just that the time is ticking away with just six more games remaining; it’s also because Chicago players seem to be completely out of shape.

Evidence of this is that they’re 6-1 in their previous seven games. The only game they won in that period was against the Detroit Lions, the NFL’s worst team, which was without a single win at the time.

What’s surprising is that the Bears’ defense hasn’t been too bad. In fact, the most points they’ve conceded per game this season is 41. It happened in Week 1 against the Los Angeles Rams. In most other games, we saw them allowing under 30. Actually, that happened in nine games.

Their defense hasn’t been too bad, but their offense has. With an average of just 16.8 points, they rank 30th in the league. One of the reasons behind this is that their rookie quarterback Justin Fields hasn’t been great, with a 58.1% pass rate, 1,361 passing yards, and four TDs on the season. He also got eight of his throws intercepted thus far.

On top of everything, Fields is coming from an injury and it’s still unclear whether he will actually start the Week 14 game against the Packers. Either way, the Bears’ offense is likely to struggle.

Aaron Rodgers to Own the Bears Again?

“I own you” – that’s what the Packers’ quarterback roared upon scoring a rushing touchdown in the previous game with the Bears. The 24-14 win over Chicago in October was the 22nd time Aaron Rodgers has won against this opponent. So far, the legendary QB has only 5 losses to Chicago.

What’s even more impressive is that the Packers coach Matt LaFleur is undefeated against the Bears with a 5-0 record.

Further, the Packers have a fantastic record against the Bears in games played in Green Bay. At Lambeau Field, the Packers are 14-6 against their NFC North foes since the start of the 21st century.

Speaking of home records, the Packers are 5-0 on their turf in the 2021 season. Their score differential at Lambeau Field is 139-72. Their defense has been averaging just 14.4 points against them at home, which is the best average in the NFL.

Knowing all this, it’s only logical to assume we’re not going to see Chicago scoring too many points on Sunday. What about the Packers? Well, they should score just enough to cover the 13-point spread.