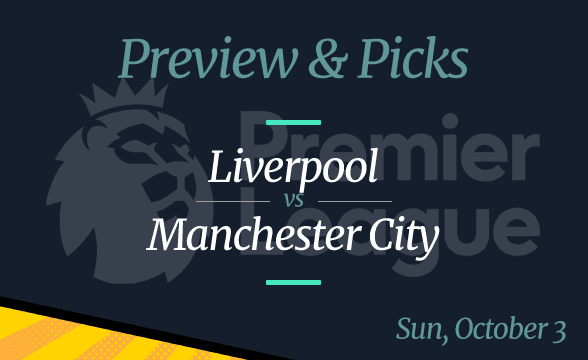 This season, the two are once again among the top title favorites. No surprise there, as they’ve been laying elite soccer since the start of the season. With 14 points in 6 games, Liverpool is at the top of the table. Manchester City is just behind with 13 points.

Obviously, we’re in for a very exciting duel on Sunday. The question is, who will win? Or maybe we’ll see a draw at Anfield? Let’s see what oddsmakers think!

Odds taken from DraftKings on October 1, 2021

March 7, 2021 – that’s the last time Liverpool lost a Premier League game. What’s even more impressive is that they’ve been scoring a lot of goals lately, with a total of 20 goals in the past six games. That’s 3.33 goals on average per game.

Mohamed Salah has been their best player so far, although others are not far behind when the form is concerned. In fact, Sadio Mane and Diogo Jota have also been superb in the offense. At the back, Virgil van Dijk has been superb as you’d expect from the Premier League MVP from two years ago.

Knowing all this, you’d expect them to get an easy win on Sunday. The trouble is that it’s not any team that’s coming to Anfield. It’s Manchester City, the reigning champ of the Premier League.

Manchester City has won only two games against Liverpool at Anfield since the 1980s. One of those wins, however, happened last season. Does this mean Man City players have found a key to beating the Reds on their turf? Not necessarily, because the game in question was played with no fans in attendance. This time, however, Anfield will be packed with Liverpool supporters.

This probably isn’t going to scare Man City players, as they recently pulled off a big win against Chelsea in London. There were more than 40,000 fans in the stands of Chelsea’s Stamford Bridge, most of whom were rooting for the home team.

That didn’t stop the visitors from dominating the game. Manchester City had the ball in their possession for nearly two-thirds of the time, with three times more goal attempts than Chelsea. The result of such a dominant performance was a 1-0 win for the Premier League champions.

Can they do it again? They might, although a draw seems like a much more plausible outcome.

Veikkaus Reduces Workforce, Parts Ways with up to 190 Workers

Citing decreased business volumes, Finnish state-run gambling operator Veikkaus announced that it will reduce its workforce. The company said today that it will be letting go of as many as 190 employees. Veikkaus to Lay Off Employees, Change Employment for Some Workers It was back in November of last year when Veikkaus, the gambling monopoly […]

Last week, the Swedish Ministry of Finance and Chamber of Commerce announced it is considering increasing the regulation of offshore operators who operate in the country. The Ministry’s director-general Gunnar Larsson has explained more about the decision. Reducing Unlicensed Gambling in the Country Larsson’s report was commissioned by Ardalan Shekerabi, the Minister for Social Protection. […]

MGA Asks The Industry for Feedback on the Provider Guidelines

The Malta Gaming Authority has asked all of the parties within the gaming industry, to wit operators, providers, and wider interest groups to comment their opinions on the Revised Audit Service Provider Guidelines. Depending on the results from the queries, the MGA might revise some of the points. MGA Thinks It Is Time to Revise […]