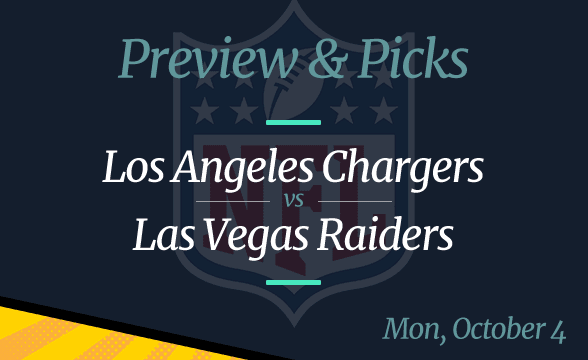 The Las Vegas Raiders remain undefeated after three rounds, but online sportsbooks think their flawless run will end on Monday night. That’s when they travel to LA to take on the Chargers at SoFi Stadium.

The Raiders are seen as a 4-point underdog heading into the NFL’s Week 4, but the same was the case in two of their previous three games. Actually, against the Steelers in Week 2, they entered the game as a 6-point underdog, only to win 26-17.

Can they pull off something similar on Monday? Let’s find out!

All odds are per DraftKings as October 1.

This is the first time the Raiders have gotten off to a 3-0 start of the season since 2002. What’s even more impressive is that they got their wins against some pretty tough rivals.

In Week 1, they beat the Baltimore Ravens in overtime after coming back from a 14-0 deficit. Their Week 2 game saw them thrashing the Pittsburgh Steelers in Pittsburgh. Finally, in Week 3, they beat the Miami Dolphins 31-28 at home.

The man they have to thank the most for their success in 2021 is their starting quarterback, Derek Carr. Thanks to his brilliant performances (1,203 yards for 6 TDs and 2 interceptions in 2021), the Raiders were able to score a total of 90 points, which is the fourth-best record in the conference.

The bad news for the Raiders’ offense is that they’re squaring off with the defense that prevented Patrick Mahomes from doing anything last Sunday.

In Week 3, the Chargers beat the Kansas City Chiefs 30-24 at Arrowhead Stadium. Their defense stopped the #1 MVP favorite from doing much – Mahomes went 27/44 for 260 passes and 3 TDs.

Sure, that doesn’t seem so bad, but the Kansas City QB also had two interceptions and got sacked twice. Furthermore, his YPA of 5.91 was only the third time in his professional career that he went under 6.00 yards gained per pass attempt.

If they managed to stop Mahomes in Kansas City, they surely can stop Carr in LA, right? I think so, but there’s no doubt this is going to be an exciting game from the very start.

The Chargers look capable of winning this game, but whether they can cover the spread remains a big question. I think they could end up beating the Raiders by only a field goal.

Pick: Chargers to win, but not cover the spread; we shouldn’t see more than 52 points in this game.