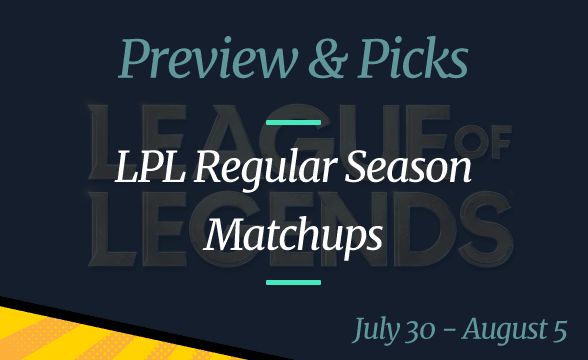 The League of Legends regular-season games continue from July 30 through August 5, promising another exciting round of LoL esports action to see. Some of the upcoming games are not necessarily too evenly matched, but with the LOL esports betting odds constantly shifting, the opportunity for a value bet is ever-present.

We have summarized several high-profile matches that will take place across the LPL and LDL, and which will create real value to turn an underdog bet into a winner.

With the World Championship approaching, you will want to keep your eyes peeled for how teams perform during the regular season. In the meantime, you can benefit from taking a look at the available betting odds for regular league games below.

First, there is LGD Gaming (-166) playing Oh My God (+115) on Sunday. LGD Gaming is currently ranking 12th in the LPL after a series of bad beats and an underwhelming performance.

Conversely, Oh My God has been able to push to 8th position and has much fewer losses compared to the teams ahead of them. Posted at (-166) favorites, LGD Gaming is tipped to succeed in the weekend game.

Yet, we believe that Oh My God’s current standing in the LPL gives them a significant edge and you should probably pick OMG over LGD Gaming for this one.

Royal Never Give Up vs. Team We Pick

There seems to be yet another great value betting opportunity. Royal Never Given Up currently ranks 10th in the overall standing in the LPL and is nevertheless posted as favorites at (-217).

This comes to Team We’s listing as underdogs at (+148). While the oddsmakers at MyBookie.ag seem to think that RNG has the upper hand here, our gut tells us that Team We will continue to carry on their momentum.

They are riding a four-game win streak and, with the games against Rogue Warriors and Invictus still pending, there is a good chance that Team We could be coming with a six-game winning streak for the game on August 3.

The only thing we feel you ought to be aware of is that Team We will be playing many more games than their opponents, leading to a drop in their performance.

The game between Edward Gaming and LNG pits two distinct LPL teams against each other. Edward is currently standing in the LPL group standing with LNG being third. The odds put Edward Gaming as a strong favorite at (-303) against LNG’s (+194).

However, Edward did lose two consecutive games and is set up to play versus Victory Five on Friday. Meanwhile, LNG has had some issues to address with its roster, but this seems to be in the past now.

The League of Legends (LoL) World Championship is closing in with the pre-group stage scramble set to begin on October 5, 2021. The event already has fans stoked, but the return of the quintessential predictions game, Pick’em, is once again going to add to the experience and allow LoL fans to make predictions about the […]

VCS Teams Omitted From LoL Worlds 2020 Due to Travel Restrictions

Riot has announced earlier today that due to national travel restrictions as a result of the pandemic, two teams who have already qualified for the League of Legends World Championships 2020 tournament will not be able to compete at the event in Shanghai. “Over the past several weeks, we explored every possible option to include […]

For the first time since 2017, Team SoloMid managed to secure a spot in the League of Legends World Championship. In doing so, the team eliminated Cloud9 from qualifying. Cloud9 Misses First LoL World Championship Qualification Last night’s game between TSM and C9 was historic because it has two serious implications. First, Team SoloMid is […]