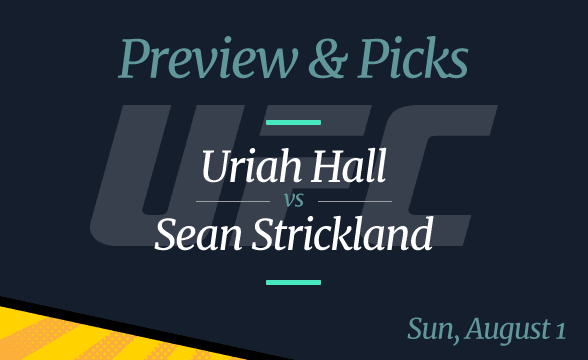 The fight between Uriah Hall and Sean Strickland is a much-expected event on the UFC circuit, as both fighters will be looking to secure a victory in the fight.

Hall is a formidable opponent and posted as the underdog at (+183) against Sean Strickland (-213), based on BetOnline sports betting data. The fight is scheduled for Saturday, July 31, at the UFC APEX Center in Las Vegas and will be held at 11:15 PM.

The main card begins at 9:00 PM, though, so if you want to tune in early, you can definitely do so by looking up BT Sport 1 if you live in the UK and ESPN/ESPN+ if you are based in the US.

Where and When to Watch Hall vs Strickland?

The fighters are both distinct in the UFC, but Strickland is the one who has secured a 23-3-0 record, impeccable stats by the promotion’s standards. Conversely, Hall has been struggling with his 18-9-0, but the truth is he is back after a bad beat when he lost three consecutive fights.

Since December 2018, Hall has been unstoppable. He took out Bevon Lewis and Antonio Carlos Junior in 12 months and fought Anderson Silva in an intense four-round melee, which ended with Hall defeating the 34-11-0 fighter.

His most recent success was in April when he defeated Chris Weidman, a 15-6-0 fighter. Admittedly, Hall didn’t get the most challenging opponents those past months, but neither did Strickland.

Similar to Hall, Strickland is riding a four-fight winning streak, and he will be looking forward to securing another. Most of his fights have gone up to 3 rounds recently, which means that he is in no hurry to take an opponent out and much rather prefers to bid his timing well.

Krzysztof Jotko lost to Strickland in May, with the fight stretching for three rounds and settled by unanimous decision.

Tale of the Tape Strickland vs. Hall

In terms of statistics, Hall has double his opponent’s UFC finishes which definitely indicates that he is a well-seasoned veteran in the promotion and one that has taken on many challenges. He surely has a much better reach, and that would matter more if it were boxing, but, in the UFC, there are many ways to subdue an opponent.

Strickland spends an average of three rounds to usually secure a win, which is slightly more than Hall’s two rounds he needs. Strickland is younger, which means that he has more stamina to last in the long term.

If this fight goes the distance, Hall will have to keep up with his opponent, which can prove difficult. Can Hall lean in early and use his range to tip the scales? Maybe, but he will have to avoid getting locked in a chokehold as well. Both men will be fighting to their best ability, and there is another twist of their rivalry – they are actually friends outside the UFC, and this could make it a little harder to fight too aggressively at first. It might come down to pure psychology and who can keep it strictly business.