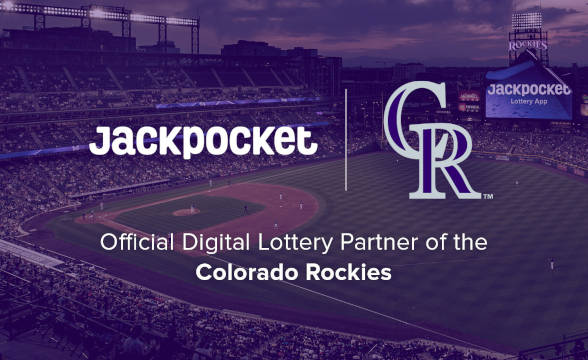 Jackpocket continues to bring the lottery experience to sports fans through its latest tie-up with the Colorado Rockies, a famed Major League Baseball franchise.

This is the third big partnership between Jackpot and an MLB team after the company signed both the Minnesota Twins and Texas Rangers. Rockies VP of corporate partnerships Walker Monfort welcomed the opportunity as well and said:

“We are thrilled to partner with Jackpocket to facilitate growth of their brand amongst our audience. Alongside their existing partnerships in professional and collegiate sports, we look forward to enhancing their user base throughout the Rocky Mountain region.”

The company is an Official Mobile Lottery Partner for the Rockies as a result. To celebrate this occasion, Jackpot will host raffles that will feature ticket giveaways, branded merchandise, and unique VIP experiences that will allow fans to connect with the Rockies on-site and digitally.

New Jackpocket players who use the “ROCKIES” promo code at checkout in the app will also get a free lottery ticket. Jackpocket branding will appear on the Rockies’ official website as well as the sports team’s official media channels. The partnership is focused on raising awareness for Jackpocket and finding new ways for lottery players and sports fans to explore fresh products.

Apart from this, the partnership will run through radio programs and Jackpocket signage will be visible on LED assets at the Coors Field and McGregor Square as well as the stadium concourse TV displays. Jackpocket has been aggressively expanding with major league franchises.

Jackpocket Is Known Across US Sports World

The company already secured three partnerships in the MLB and there are a total of seven deals with representatives from the NFL, NHL, and NBA, including college athletics. Commenting on this partnership, Jackpocket founder and CEO Peter Sullivan said:

As baseball season really heats up, our partnership with the Colorado Rockies couldn’t come at a better time. The Rockies are a local institution and we’re excited to bring fans a new, digital-first way to play the lottery while also celebrating their love of this storied team.

Just recently, Jackpocket launched in New Mexico with Circle K. The company continues to seek and expand its offer as it scales both its presence in the lottery and sports business.