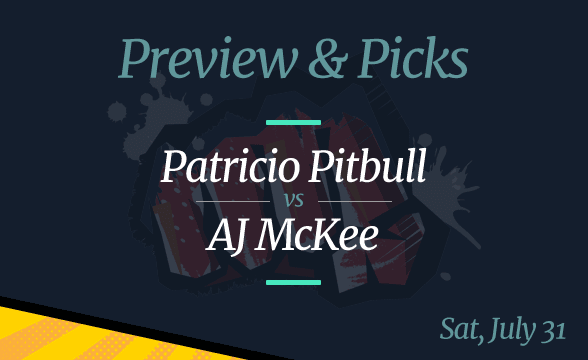 AJ McKee will fight against Patricio Freire “Pitbull” this Saturday at the Bellator Featherweight World Grand Prix final. The winner of the fight will take home the grand prix belt, the featherweight belt, as well as a $1 million prize.

MMA fans are in for a treat, as an iconic fight will take place this Saturday during Bellator 263. This weekend, at the main event, Patricio Pitbull will defend his featherweight championship title against AJ McKee. There are bragging rights a title and the hefty $1 million prize up for grabs!

When and Where Is the Fight AJ McKee vs Pitbull?

Patricio Freire aka Pitbull was born in Natal, Rio Grande do Norte, Brazil in 1987. Currently 34, he fought 36 times and has 32 wins and 4 losses. Focusing on the wins, we see that he has won by a knockout 11 times, while 12 wins were granted by technical submission. Pitbull is 5’6 and has a 65.5″ reach.

With 13 Bellator finishes, Pitbull is undoubtedly a worthy adversary for McKee. Besides being a current Bellator Lightweight Champion, Pitbull is also a two-time Bellator Featherweight Champion and current titleholder. Fighting his way up, he won fights against Emmanuel Sanchez, Juan Archuleta as well as Pedro Carvalho.

AJ McKee an up and Coming American MMA Fighter

AJ McKee is a professional MMA fighter born in Long Beach, California, United States. Born in 1995, he’s currently 26 and has participated professionally in 17 fights and won all of them. From that total, McKee won six fights by knockout, six fights by submission, and five by decision.

Overall, he has participated 12 times in Bellator. While the victories speak for themselves, some fights are worth mentioning. In August 2016, McKee won a fight against Cody Walker by submission. That fight took only 32 seconds. Similarly, he won a fight against Brian Moore in November 2017. The fight lasted only 42 seconds until McKee was declared a winner via technical submission. Another spectacular fight which the American has won is the one against Georgi Karakhanyan in September 2019. It took McKee less than 10 seconds in the fight to knock out his opponent and to be declared the winner.

One Championship, a mixed martial arts (MMA) sports media company from Singapore, is actively seeking to go public in the US via a merger with a special purpose acquisition company (SPAC), Bloomberg reports. Preparing for Public Listing According to unnamed sources familiar with the matter, One Championship has already contacted Credit Suisse Group AG and […]