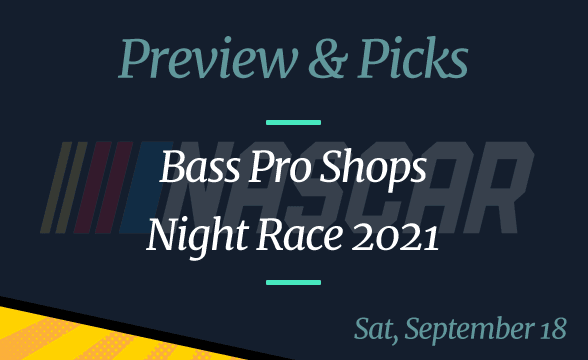 It’s on. Well, actually it was never off. The NASCAR Cup Series continue as a new event is next on the circuit with the Bristol Motor Speedway hosting the Bass Pro Shops Night Race this Saturday, October 18.

The evening race promises to be plenty of fun as Kyle Busch comes in the lead with (+400) followed by Kyle Larson (+450) and Denny Hamlin who is third with (+600). Now, the moneyline is always a bit difficult to get, but we have featured a few more odds, including those tipped to finish Top 3 and Top 5 in the race. Let’s have a look.

Coming in as Favorite, Kyle Busch is Facing Tough Competition

The Bristol Motor Speedway will offer plenty of challenges to all drivers. The top 10 drivers on the list are definitely looking at a tight competition with Kyle Busch leading the pack posted at (+400).

As a shorter track, Bristol gives Busch an edge as he is traditionally a driver that deals with these short distances in a more composed manner, easily positioning himself ahead of the pack. The conditions of the raceway are already familiar to him and he is in no way going to be surprised by the time of the race, which is set for 7:30 pm ET.

In fact, he is one of the most experienced drivers here giving him a good chance of winning. Then again, he hasn’t won in four seasons with his last victory going back to 2017. Busch has three wins in the race, which definitely places him as someone to watch out for. He also has the most leads in the last seven races with over 640 laps, so there is that. Busch also averages 98 mph at Bass Pro Shops Night Race, based on his last three wins.

Who May Pose a Threat to Kyle Busch on Saturday?

Naturally, one question remains. If Busch has posted such a consistently good driving record, is there anyone to really come between him and a Saturday win? Well, Kyle Larson may not be as successful in the race and he has in fact not won it even once, he is still ahead of the pack. Larson also has five Top-6 finishes this season making him a consistently good driver this season. He also placed four of those in the Top 3, which gives him a good chance at Bristol.

Larson will probably place in Top 3 just as well, but if you are looking for a somewhat shot, we recommend turning your eye to Joey Logano (+1000). He has achieved seven Top 10s this season in 11 Bristol Motorway starts, which does mean something.

He is also proving to be a good and consistent driver this season. Then you have Chase Elliott who is posted at (+800). Since his All-Star Race win in July, Elliott has been doing a fine job, and Bristol Motorway could recreate the conditions he needs for yet another win.

As things stand, Kyle Busch is definitely not the only contender for the title. If we are looking at the moneyline, though, we would say to go with him if you don’t want to risk too much. If you are looking for a mid-range risk, you can still do Elliott or Logano to win.

For those of you who have got accustomed to European and North American golf terrains, there is a big change of scenery coming this Wednesday, October 20. The ZOZO Championship is playing out of Inzai, Japan and it will feature a number of strong contenders as per DraftKings’ latest odds. Xander Schauffele is naturally in […]

UFC Vegas 41 Costa vs Vettori: Odds, Picks, Prediction and Where to Watch

UFC Vegas is back and the UFC Apex will play host to the Las Vegas event ahead of Abu Dhabi’s Fight Island and the Madison Square Garden fights in New York in the coming weeks. For those of you who appreciate a good fight, the bout between Paulo Costa and Marvin Vettori is definitely an […]

The Kansas City Chiefs remain one of the top 3 Super Bowl candidates, with the odds on them winning the Championship currently standing at +600. This might seem strange, knowing that their record ahead of Week 7 is 3-3. We saw them struggling many times this season already, but what happened last weekend has filled […]

After two weeks, the Green Bay Packers return to Lambeau Field, the largest venue in the NFL. With more than 80,000 fans to cheer them on, the Packers look destined to extend their winning streak to six straight games. What do the Washington Football Team (WFT) think about this? These guys will give their utmost […]

With five straight wins, the Baltimore Ravens are the most in-form team in the AFC. They did struggle in a couple of games, but they also impressed in some, including their Week 6 game against the LA Chargers. The game was played in Baltimore and the hosts won 34-6. In Week 7. The Ravens now […]

The Denver Broncos suffered their third straight loss last Sunday when they lost to the Las Vegas Raiders at home. Their next opponent is a team that’s currently on a two-game losing streak. The Cleveland Browns, however, had a tougher schedule than the Broncos, which explains why the bookmakers think of them as the favorite […]

The Dana White’s Contender Series wasn’t immediately welcomed but seven weeks of successful high-class MMA has earned the format its good name and reputation. Now, we are heading into the Contender Series Week 8 on Tuesday and with this, we are keen to explore the numerous fighters who will try to earn a place in […]