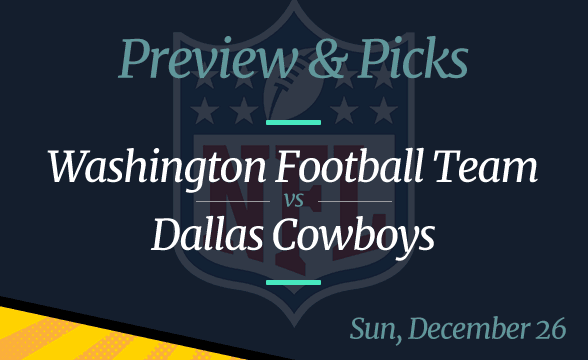 The 2021 NFL Playoff picture is such that the Dallas Cowboys still haven’t secured a place in the postseason even though their record is 10-4 and there are only three games to be played. However, with a win over their divisional rivals, the Washington Football team, not only would they secure a spot in the playoffs but they would also win the NFC East title.

That’s more than enough motivation for the Cowboys to win in Week 16, for which they will have the support of their fans from the stands of AT&T Stadium in Arlington. Now that you know all this, you shouldn’t be surprised that online bookmakers see Dallas as a huge betting favorite in Sunday’s game.

All odds are per FanDuel as of December 22.

WFT Still in the Hunt for a Postseason Spot

Washington is 6-8 on the season, which puts them in the #10 position in the NFC Rankings. What this means is that this team can still challenge a Wild Card berth. For that to happen, however, the WFT need to do well in the remainder of the season.

The good news is that all of their remaining games are against their divisional rivals – Dallas Cowboys, Philadelphia Eagles, and New York Giants.

Obviously, the hardest of those is the one taking place on Sunday, but if they manage to get a win from their trip to Texas, they’ll have an open road to the postseason.

Dallas Wants to Win the Title at Home

With a win on Sunday, the Cowboys would grab themselves the NFC East title. It would be the first time since 2018 that they won it, as well as the first time in the Mike McCarthy era.

They surely have the manpower to do it. After all, they’re not 10-4 by accident. Further, they’ve already shown they know how to handle Washington. In their first clash of the season, the Cowboys won 27-20 on the road.

This time, they’re playing at home, which is where they’re 4-1 against Washington in the past five seasons. Their only home loss in that period happened in November 2020, where there was only a small number of fans in the stands of AT&T Stadium due to COVID-19 regulations.

This time, the Cowboys’ stadium will be packed with their loyal fans, who’ll swarm to Arlington to witness their boys win the divisional title.

Picks: Dallas Cowboys to win and cover the spread; over to hit