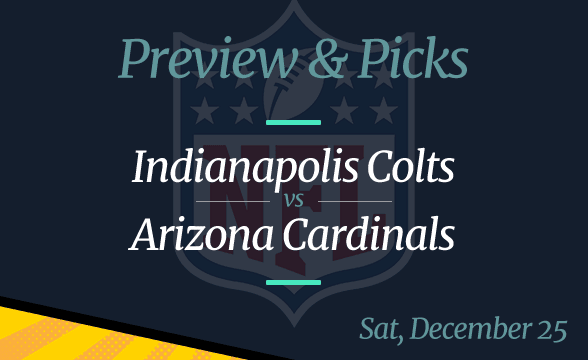 After a disappointing start of the season, the Indianapolis Colts entered a superb run. As a result, they entered the playoff race. With an 8-6 record, they would get to the postseason if the regular season ended today. However, with three more games left to be played, they need to be concerned.

This goes especially because their next opponent is the Arizona Cardinals, a team that’s 10-4 in the 2021 season. The two meet on Christmas on the Cards’ turf, State Farm Stadium in Glendale.

All odds are per FanDuel as of December 22.

The Colts are 8-6 on the season, with three of their losses happening in the first three games. Since then, they won eight and lost three. Two of those defeats happened in overtime.

Indianapolis is coming to Arizona after back-to-back wins. First, they got a 31-0 shutout win over the Houston Texans. Then, they defeated the surging New England Patriots who were on a seven-game win streak before losing to the Colts.

The man most responsible for the Colts’ fantastic run is running back Jonathan Taylor. The RB has scored at least one touchdown in every single game since Week 4. His brilliant performances put him in the MVP conversation. At the moment, he’s now in the #3 place in the list of regular-season MVP candidates with the odds of +900.

The Cards were fantastic in the first two months of the season, but now, they’re worried they might end up without the divisional title. They have the same record as their NFC West rivals, the Los Angeles Rams, who are sitting in the #2 position in the division.

The Rams came so close to the Cards because of Arizona’s disappointing results in the last couple of weeks. They lost three of their previous five games, coming into Week 16 after two straight losses. If their poor run continues, they will drop from the #1 place in the NFC West.

They surely have the quality to win on Christmas, but their recent form is very worrying. The thing is that in the previous round, they lost to the Detroit Lions, the NFL’s worst team. That said, the Cards need to step out from their disastrous run and get a big win on Saturday.

Picks: Arizona Cardinals to win and cover the spread; over to hit