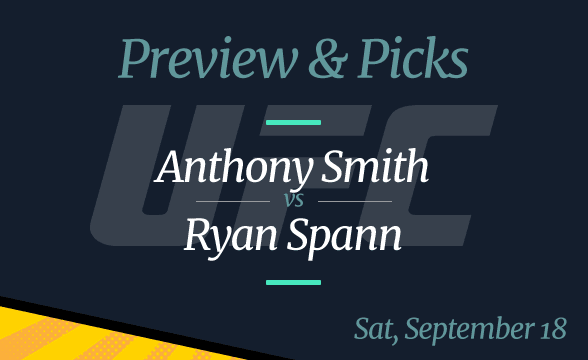 We have a huge fight coming up with UFC Vegas 37 featuring nine worthwhile bouts that we recommend tuning in to watch from start to finish. Yet, the event’s main draw is the headline fight between Anthony Smith and Ryan Spann who will be facing off on Saturday, September 18 at the UFC Apex in Las Vegas.

The event is going to pull in a lot of eyeballs and air on ESPN+ at 7 pm EST, which is when the main card gets under way. We do recommend tuning in a little earlier, though, and making sure you catch a lot of the action that is taking place in the preliminary card.

Where and When to Watch Anthony Smith vs Ryan Spann

The fight between Anthony Smith and Ryan Spann will be broadcast on ESPN+ and will take place on Saturday, September 18. The main card is expected to start at 7 pm EST, with a few preliminary fights between the Smith vs Spann bout.

Tale of the Tape Smith vs Spann

How Do Things Look for Smith and Spann?

Anthony Smith is posted as the favorite here with his (-164) as the fighter is coming back from a losing streak. He notably lost to Jon Jones for the light heavyweight belt and he took more defeats from other little-known fighters. However, he has been able to post a few wins, against Jimmy Crute and Devin Clark recently.

It’s fair to say that Smith has a respectable track record in MMA as he has posted 35-16-0 in his career. He will be coming against Spann on a fairly high note and hope to use his opponent’s presumed lack of confidence as Spann has not headlined a main card in the past.

However, Spann has another reason to seek recognition as he can become one of the top 10 light heavyweight fighters in the world if he successfully defeats Smith. Spann also has a single loss to Johnny Walker by TKO in his last four fights.

His appearance in the UFC will be interesting to watch as we don’t know what to expect from him. Career-wise, Spann has 19-6-0 as his record and that is decent. He is still over half a dozen wins behind Smith, but his win ratio is already better.

One fatal weakness we see in Spann’s fighting style is his stamina. He will need to be prepared to go the distance as Smith clearly can. If this fight stretches, Smith’s advantage will get even more significant unless Spann proves that he can do well in an extended fight.

Ion Cutelaba vs Devin Clark Odds, Time and Where to Watch