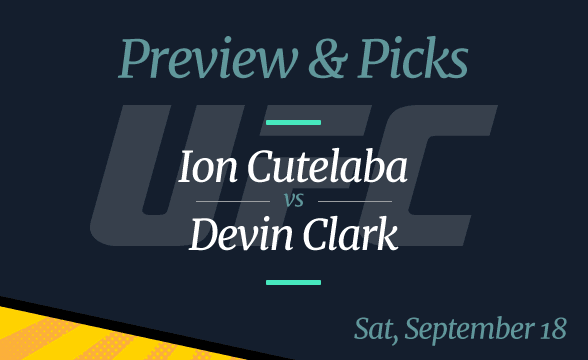 This Saturday will be packed with fights that you must not let fly under your radar. For the first time in a while, a UFC event produces a series of worthwhile bouts that will put many up-and-coming fighters out in the hexagon. Whether you have heard about them is one thing, but they are all quality MMA fighters.

The bout between Ion Cutelaba and Devin Clark is one such. As the event prepares to take place at the UFC Apex in Las Vegas this Saturday, September 18, you can rest assured that the sportsbooks already have the odds locked in and ready for the big night. You will be able to watch UFC Vegas 37 on ESPN+.

Where and When to Watch Ion Cutelaba vs Devin Clark

Tale of the Tape Cutelaba vs Clark

What to Expect from Cutelaba vs Clark

Many people will be interested in the upcoming fight between Cutelaba and Clark. Cutelaba has long been touted as a fan-favorite athlete who has won the hearts of many. Known for his quick first-round finishers and powerful KO/TKOs, Cutelaba is bringing a lot of punching power.

He is coming into the fight on a bad beat, though, after achieving a draw versus Dustin Jacoby and losing against Magomed Ankalaev back-to-back. Yet, he is still tipped to win at (-145).

Most of his wins so far have been clocked against little-known fighters but fans still enjoy watching Cutelaba whose presence in the ring is noticeable and resonates with the crowds. He has been dubbed “THE HULK” by fans.

If Cutelaba manages to find his way to the top, he is bound to become an even bigger sensation as his one-punch/game-over style is truly entertaining unless you are on the receiving end of this punch.

To do that, he will have to overcome Devin Clark who is evenly matched. Clark has also been struggling to establish a clear record. He most recently lost to the event’s main card fighter, Anthony Smith in a 2:34-minute bout. He won his fights against Dequan Towsend and Alonzo Menifield in five minutes each.

Both fighters were fairly good and experienced, giving Clark a solid foothold. Clark will be facing two problems in the upcoming bout. On the one hand, he has to stay clear of Cutelaba’s one-shot punch. On the other, he has to outlast and outfight him. With an aggressive fighter such as Cutelaba, this is likely to be a difficult task, but if Cutelaba goes in too aggressively, he might end up tired early in the fight.

2021 Fortinet Championship Odds, Date, Time and Where to Watch

A federal judge ruled against Seminole Tribe on Wednesday night, after she refused to suspend her order from earlier this week. That ruling declared the amended gaming deal between the tribe and Florida illegal. Legal Fight over Florida Sports Betting Continues An amended gaming compact gave Seminole Tribe the exclusive statewide right to sports betting. […]

Facebook continues to face legal headwinds from disgruntled consumers who have taken an issue with the company’s policy on social casino apps. The lawsuit filed with the Court of Northern District of California San Jose Division alleges that the company participated in an “illegal gambling conspiracy,” Law Street reported. Social Apps Again Targeted on Facebook […]

A 42-year-old man from New Jersey who invented a heart-wrenching story to raise funds online in 2017 pleaded guilty in front of the U.S. District Judge Noel Hillman in Camden on Monday. Investigators named the man, Mark D’Amico, to be the mastermind behind the scam. Together with then-girlfriend Katelyn McClure and homeless veteran Johnny Bobbitt […]

According to the Las Vegas Sun, Anthony Rocco Martin (17-6), a former UFC fighter, was arrested in Las Vegas on Saturday after allegedly urinating at a casino floor, and then punching a security staff member who responded. Save it For the Ring Caesar’s Palace patrons witnessed the incident around 12:45 AM on Saturday. Police arrived […]

Manufacturer of casino equipment and supplier of online gaming content International Game Technology (IGT) announced the first-ever omnichannel Wheel of Fortune linked progressive across land-based, mobile and online will be unveiled at the SBC Summit North America 2021. Link Jackpots across Land-Based, Mobile and Online The Wheel of Fortune linked progressive will be part of […]

Slot machines have been around since the 1900s’ and their popularity around the globe is synonymous with casinos. While some casinos offer table games as well, other venues feature slots only. Since the invention of the first mechanical slots, the popularity of the machine has been growing at an unstoppable rate. Slot Machines Continue to […]

A sexual harassment lawsuit that was filed against the former CEO of Wynn Resorts, Steve Wynn, and the company itself by nine women will go forward after a decision made by the Court of Appeals for the Ninth Circuit on Tuesday. In the original ruling, the suit was dismissed in July 2020 by James Mahan, […]

FansUnite Spearheads Into the US Market With American Affiliate Acquisition

Canadian betting-oriented sports and entertainment company FansUnite will spearhead into the US market through the strategic acquisition deal of the sports betting tech provider American Affiliate. The deal will see FansUnite pay American Affiliate about $58.2 million. Out of that total sum, $13.5 million will be paid in cash, $41.7 million in FansUnite shares and […]

The Deutsche Bank Gaming, Lodging, Leisure & Restaurant Conference in Miami has attracted a healthy bit of interest, CDC Gaming Reports wrote in a recent article noting down the highlights of the event. The publication estimates that the numbers of attendees were up 60% compared to 60%, making it one of the most significant expos […]

A criminal group have used casinos to launder millions of ill-gotten funds obtained through the exploitation of Central American laborers who were forced to work in inhumane conditions across farms in Florida, Georgia, and Texas, and elsewhere court documents have revealed. According to the documents, the gang was a “modern-day slavery” operation which used the […]