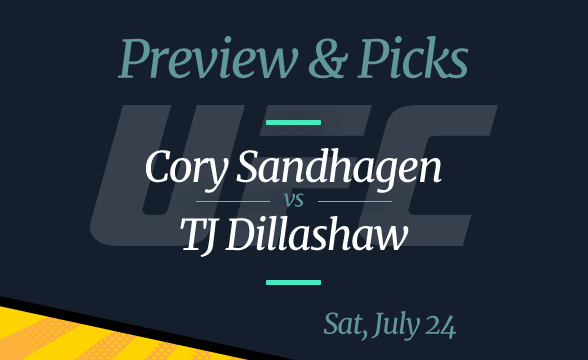 There is not a week without fighting events in the UFC and that is good news for all of you MMA aficionados out there. The upcoming UFC Vegas 32 on July 24 promises to be every bit as exciting as it looks.

The fight will pit former bantamweight champion TJ Dillashaw against Cory Sandhagen who is looking to add a third victory to his name after defeating Marlon Moraes and Frankie Edgar.

Dillashaw is coming back after a two-year USADA suspension which makes the fight all the more exciting with the fallen-of-grace fighter looking to restore himself to glory and start climbing up the UFC pecking order before long.

With the fight slated for 7 pm EST this Saturday, we definitely have what to look forward to this weekend.

The odds seem to favor Sandhagen heavily even though the fighter is less experienced in the hexagon. With his 14-2-0, Sandhagen is a formidable prospect who is determined to bring another victory in, especially after his loss to Aljamain Sterling.

Sandhagen has been consistently winning his fights with TO/KTO but has proven a little too susceptible to chokeholds, a weakness he is still working through.

In honesty, though, there are some very skilled grapplers in the UFC and unless you are friends with one, fighting your way of a chokehold can prove close to impossible. This brings us to Dillashaw, who seems to have pretty much the same fight stance and style as his opponent.

Dillashaw, the once bantamweight UFC champion has 17 victories to his name and four losses. Once again, the majority of his victories have been achieved through KO/TKO and on some occasions, via decisions.

Prior to his suspension, Dillashaw had won four victories in a row. He never had his chance against Henry Cejudo because he had tested positive for recombinant human erythropoietin (EPO), an enhancement drug, and was handed down a 2-year suspension by the United States Anti-Doping Agency.

Absence from the hexagon is usually not great for any fighter, but the UFC has had many great examples of long-forgotten fighters and if anything, Dillashaw seems to have been working hard all this time. Therefore the +155 odds are not so long as they may appear.

Where and When Is TJ Dillashaw vs Cory Sandhagen?

The fight between Dillashaw and Sandhagen will take place at the UFC Apex at 7 pm EST on Saturday.

Where to Watch Dillashaw vs Sandhagen?

UFC Vegas 32 and the fight between Cory Sandhagen and TJ Dillashaw will air on ESPN 27 on Sunday.

TJ Dillashaw vs Cory Sandhagen Tale of the Tape

Dillashaw is clearly the older fighter and this comes with its own baggage. However, he is also experienced, dangerous, and has had more brawls in the UFC. While Sandhagen posts some physical qualities that are superior to his opponent, he will also have to keep his guard up and prepare for a strong pushback.

Physical characteristics don’t always settle the result and Dillashaw is as good as Sandhagen at least on paper. The true big unknown here is whether his years in absentia were well-spent and whether he can make a strong comeback to the UFC. Dillashaw has more finishes so if his blitz works, Sandhagen may not last long in the hexagon.

Regulators in Argentina Ask for Domain Harmonization for Gambling Sites