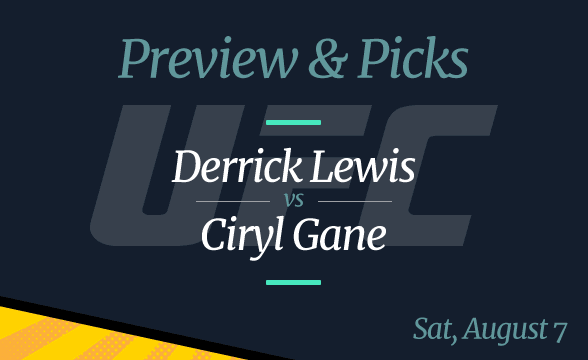 A huge main card fight is coming up in UFC 265, and the ticket is packed with great bouts so that you can simply tune in to watch or, better yet, bet on. The oddsmakers are not quite sure which way most of these fights will go, and there are many value betting opportunities.

The main ticket fight between Derrick Lewis and Ciryl Gane is the one that will have most of the eyeballs on, but there are also the preliminaries that will also be worth tuning in to watch with Vicente Luque taking on Michael Chiesa and Jose Aldo facing off against Pedro Munhoz.

With so many great fights on the table, we will now focus on the Lewis vs. Gane bout, which will definitely prove one of the most interesting during the night. Dana White and the promoter’s managers have done a fantastic job of planning UFC 265.

Where and When to Watch UFC 265 Lewis vs Gane

Lewis vs Gane Tale of the Tape

The big question here is who can stop Ciryl Gane’s nine-win streak. It’s certainly impressive, and the heavyweight category is nothing to take lightly. The odds clearly seem to favor him, too, with the whopping (-400) according to BetOnline, almost guaranteeing the fighter will secure his upcoming fight.

Gane has already proven his worth against some pretty tough opponents, including Jairzinho Rozenstruik and Alexander Volkov. He won against both in a five-round bout by unanimous decision. While Gane opened easy into the UFC, taking on some opponents in two or three rounds, the last two bouts were a real test of his stamina.

The upcoming fight against Lewis would be no different, naturally. He will rely on both punching and kicking as he and his opponent are not really grapplers. One notable trait that benefits Gane is the pace of the fight. Lewis definitely has a slower response time, and he plays a little more strategically if anything.

On the flip side, Lewis is coming in on a four-fight winning streak with his last losses to Daniel Cormier in 2018 and Junior Dos Santos in 2019. Even though Lewis has been defeated more often, he has also had the opportunity to learn from those experiences.

While he may be slower and older, we see every reason why Lewis would be able to overcome his opponent and should be given a fairer chance. We believe betting (+300) on the moneyline could yield a good return even though the odds seem to suggest Lewis doesn’t stand much of a chance.

Conor McGregor Decided to Retire, Says “Bored of the Game”