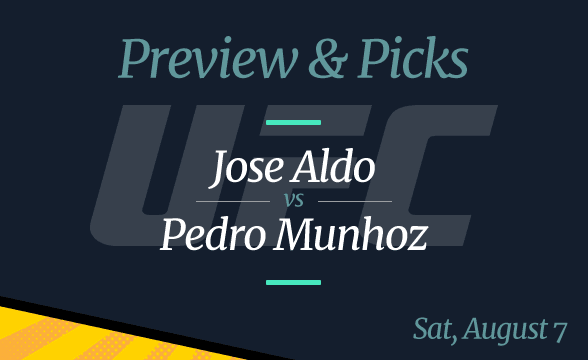 The fight between Jose Aldo and Pedro Munhoz in the upcoming UFC 265 may prove a little one-sided, according to some. However, Aldo seems to be the favorite, even though he has lost six out of his last ten matches. The oddsmakers seem hesitant for the bout and that gives bettors a perfect chance to shop around for the best UFC betting odds available today.

BetOnline is giving both Aldo and Munhoz -110, making for a slightly unappealing bet. However, the bookmaker is also listing some interesting options for bettors who are looking to delve into some of the other markets, including the Totals lines.

Judging by the odds, the fight is given a very strong chance of extending beyond the first two rounds, and that has to do with both fighters’ most recent results. To put it this way, they have both runs into a few bad runs and are not given very big chances of success right now.

Aldo, though, is an ex-featherweight champion, and, pound-for-pound, he is one of the best. The UFC format has been a little too much for him, as he lost to Holloway in two fights in 2017 and has since challenged Marlon Moraes and Alexander Volkanovski.

Both defeated him; however, Aldo has not been helpless outside the main UFC format, dominating Fight Night in the meantime. His showings in Fight Night have been a success, with Aldo taking on Vera, Moicano, Stephens and others, taking on each opponent with skill.

Another notable thing about Aldo is that in almost all of his bouts in the UFC where he lost, he lost by decision. On the other hand, he has been able to clock in many KO/TKO victories himself. Aldo was undefeated between 2008 and 2014, but lost to Conor McGregor in 2015.

When and Where to Watch Jose Aldo vs. Pedro Munhoz

Tale of the Tape, Munhoz vs Aldo

What Do We Make of Pedro Munhoz?

Munhoz is actually a pretty spry fighter. However, he doesn’t offer much in the way of punching power and his fights still include some mid-to-low ranking UFC contenders, which immediately put him at a disadvantage.

There is also the fact that Aldo is much more experienced, having fought more in the UFC big events and Fight Night bouts. Munhoz did pry away a few noteworthy victories, though. He defeated Rivera in February and has managed to win eight out of his last 11 fights, so he is definitely not in bad shape.

Winning on the moneyline doesn’t seem to be a good call, but there is a good opportunity if the fighters manage to bring in the bout within two rounds with one eliminated.