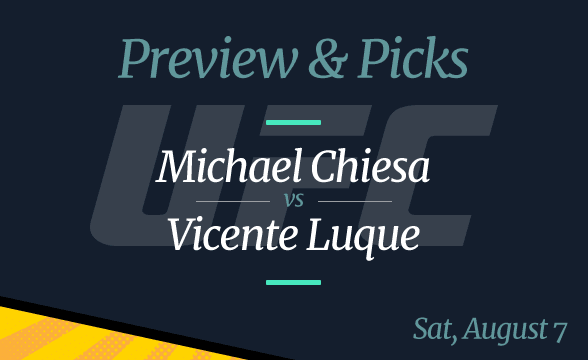 This Saturday promises to be action-packed with UFC 265 underway and the fight between Michael Chiesa vs. Vicente Luque proving an important bout on the calendar. While some iterations of the Ultimate Fighting Championship offer somewhat unexciting cards, the one scheduled for this weekend will provide bettors and fans with everything they expect.

Chiesa is known for his wrestling fighting style and Luque has demonstrated stopping power through his powerful punches. The fight seems to be likely to go anyway, but the odds put the two fighters pretty close, even though Luque is definitely the clear favorite here.

When and Where to Watch Luque vs. Chiesa

What We Know about the Fighters

When it comes to breaking down fighters and their success record in the UFC, it always comes to their physical attributes and past experience. Michael Chiesa, nicknamed Maverick, is currently the fifth strongest welterweight contender, and he is coming in hot off four straight wins.

His most recent bout with Neil Magny proved his qualities, and the recent drop to 155 pounds didn’t seem to impact much of his prowess. Shifting weight in fighting sports is definitely a challenging task.

Yet even lighter, Chiesa remains one of the best wrestlers there is, and close fights are definitely to his advantage as he has been able to bring 11 out of 20 wins in his career via submission.

On the other hand, there is Luque, who has been ominously dubbed “The Silent Assassin,” a moniker he got for his powerful early-fight victories. Luque has secured in nine out of his ten most recent fights and that is definitely what gives him a bit of an edge.

Besides, Luque does take out his opponents via KO/TKO in most of the fights, so essentially, here lies the gamble that each fighter must make. Getting too close to submitting Luque would be what Chiesa would seek to accomplish, but then again, Luque would probably have an opening to connect his salvo of punches.

Luque vs Chiesa Tale of the Tape

The odds seem to favor Luque rather definitively because of his violent play style and ability to put pressure on his opponents, but Chiesa is not just anyone. Luque has the KOs record, but Chiesa knows how to outlast his opponent.

We would bet on Chiesa to win the moneyline here, but bettors may want to explore odds at different sportsbooks and see which one posts the bigger chance. Some are inclined to give +120 on Chiesa, which is not too shabby.