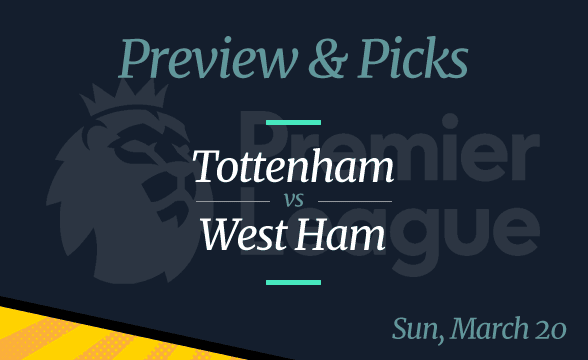 Ahead of Round 30 of the 2021-22 Premier League, Tottenham and West Ham have 48 points each. The Hammers are sitting in the #6 position, one spot above the Spurs. The reason? The EPL tiebreaker rules give an advantage to the team with a better score difference and West Ham is better than Tottenham by three goals.

Antonio Conte’s boys do have one advantage over the guys coached by David Moyes. The Spurs have played one game fewer, meaning that they have a better chance of finishing higher. Of course, it all depends on how these two do on Sunday. The team that wins will be the one to get in the top six.

Actually, depending on how other games pan out, we could see Tottenham or West Ham even get to the #4 position in the EPL standings. That said, both teams have plenty of motivation to give their utmost in Sunday’s London derby.

Tottenham’s Only Focus is the EPL Top 4

Last season, the Spurs finished eighth in the Premier League. As a result, they got a place in the Europa Conference League qualification. They did well in the qualifiers, getting to the group stage of the competition. Unfortunately for their fans, their ECL campaign finished with that phase.

Tottenham also exited the FA Cup earlier than expected. The Spurs lost to Middlesbrough on March 1 in Round of 16. Some six weeks earlier, their EFL Cup journey ended after Chelsea knocked them out in the semifinal.

What all this means is that the Premier League is the only competition in which Tottenham is currently competing. That said, the Spurs want to do well until the end of the season, with their goal being a Top 4 finish, which would mean a place in the Champions League the next season.

Sportsbooks like bet365 are giving +275 on such a scenario playing out. However, the odds are likely to get shorter if Tottenham continues to play well. The Spurs have been okay so far this month with two wins and one loss in the Prem. Their first game of the month saw them destroy Everton 5-0. Then, they lost to Manchester United 3-2 at Old Trafford, before beating Brighton 2-0 last Wednesday.

The Hammers are In a Celebratory Mood

Last Thursday, West Ham defeated Sevilla in the second leg of the UEFA Europa League Round of 16 doubleheader. The game lasted for 120 minutes as it went to extra time, where Ukrainian forward Andriy Yarmolenko scored the winner.

As a result, West Ham advanced to the quarterfinal of the Europa League. UK sportsbooks like William Hill see this team as the #3 favorite to win the title at +450. West Ham players would love to do it as it would mean writing their names in the history books as the generation that achieved the greatest success in the club’s 127-years-long history.

However, in order to do well on the continent, the Hammers would probably need to slow down in the domestic league. They are doing well in the Prem, but their busy schedule has probably made some of their players tired. Further, West Ham also has some injury concerns, with at least three players doubtful for Sunday’s game.

One of those is West Ham’s top-scorer Jarod Bowen who has 12 goals to his name across all competitions.

Oddsmakers see Tottenham as the favorite to win on Sunday for a reason. This team has amazing players on the roster, who are motivated to do well in the remainder of the EPL season. They will also have fan support on their side, which should give them a boost if needed.