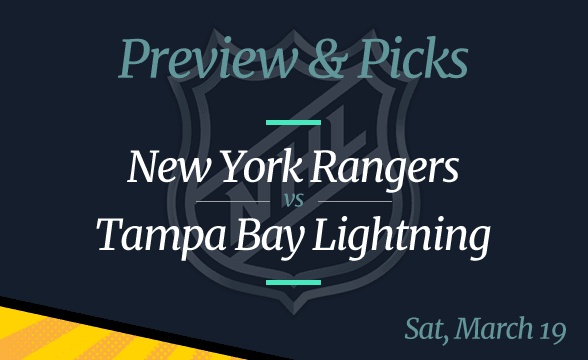 The Tampa Bay Lightning are without a win against the New York Rangers in the 2021-22 NHL season. However, oddsmakers think the reigning champions will beat the NY-based team on Saturday, March 19.

One of the main reasons for that is that the Lightning players are returning home to Amalie Arena after two wins on the road. Meanwhile, the Rangers are coming to Florida after a loss to their city rivals, the New York Islanders.

The Bolts are Back Home

Tampa is 39-6-15 on the season, which puts this team in the top 4 in the Atlantic Division. The Lightning will probably stay in the playoff zone until the end of the regular season as the team in the #5 place in the division has almost 30 points fewer.

Still, this doesn’t mean Tampa players are going to relax in the remainder of the season. On the contrary, they are going to give their utmost to get to the top of the divisional table. To do that, they just need to continue playing as well as before. This goes especially for the games played on their turf.

In the 2021-22 season, the Lightning’s home win percentage is 67.85%, suggesting that they’ve been doing a fine job so far. The best thing is that they’ve been great on their turf since the start of the year, collecting 15 points from the last 10 home matches.

On top of everything, the Bolts also have a good record against the Rangers at Amalie Arena. They did lose their most recent duel, but before that, we saw them beat the Rangers three times in a row. And one of those wins was a 9-3 blowout win (November 2019).

The Rangers Defense Not as Great as Usual

The New York Rangers are famously good at defending, the evidence being that they’ve conceded only 159 goals in 61 games. With an average of 2.60 against them, their defense is the #2 in the Eastern Conference.

The trouble is that they’ve been conceding more goals than usual. In their previous 10 games, they conceded 31 goals. It doesn’t seem too bad, but they did concede four or more goals in seven of those.

Things are even worse when it comes to their performances on the road. In March, the Rangers have played four NHL games so far, conceding a total of 19 goals along the way. That’s nearly 5 games per game on average! Are we going to see something similar happen in Tampa?

The fact that the Bolts have won the previous two Stanley Cups shows that this team needs to be taken seriously. That said, the odds of +118 don’t do them a favor, but they do a favor to bettors who definitely need to take advantage of the situation.

Picks: Tampa Bay Lightning to win and cover the spread; Over 5.5 goals

The Star Sydney Misled NAB over $664.2 Million in Suspicious Transactions