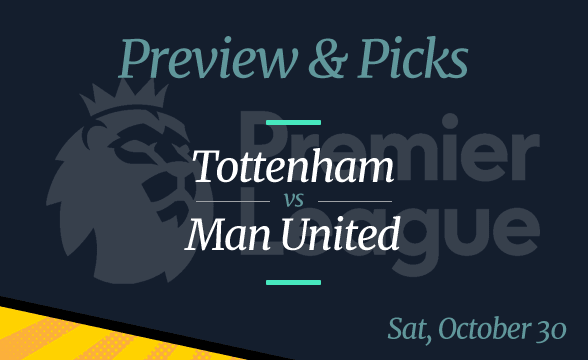 This could be the very last game with Ole-Gunnar Solskjaer as the Manchester United manager. Following a series of poor results, culminating in the 5-0 defeat to Liverpool in the previous round, the Norwegian manager is in the hot seat. Anything but a win over Tottenham would probably mean the end of his reign at Old Trafford.

The trouble is that beating the Spurs in London is not an easy task. In fact, that’s something the Red Devils have managed to do only three times in the past ten years. On the bright side, two of those wins happened in the previous four meetings at the Tottenham Hotspur Stadium.

The Spurs Look Very Tough on Their Turf

It’s been a while since Tottenham played a game at home. In fact, the last time it happened was October 3. That’s when they beat Aston Villa 2-1, which was their third home win of the season in the Premier League. So far, they have only one defeat at their stadium in this competition – against Chelsea in September.

Oddsmakers see them as the underdog in this game, but there’s no arguing that Tottenham’s roster is packed with elite players. Their captain Harry Kane is their best player, although it took him quite some time to start showing his might in the 2021-22 season.

Actually, the last season’s scoring leader in the Premier League has scored only one goal in the league since the start of the new season. It happened against Newcastle two rounds ago.

With Kane failing to find a proper form, it was Heung-Min Son who stepped up. The South Korean forward is Tottenham’s top scorer in the Prem with four goals so far.

The two look like the players who can make or break Tottenham on Saturday. If they play at their best, the Red Devils defense will not be able to stop Tottenham from scoring.

A Must-Win Game for Manchester United

Manchester United lost five of their previous ten games in all competitions. The worst of those defeats happened last weekend when Liverpool demolished them 5-0 at Old Trafford.

The man the fans are blaming for the disappointing results is Red Devils manager Ole-Gunnar Solskjaer. Ahead of Round 10 of the Premier League, he’s the top betting favorite to win the sack race. The odds on him being the next Premier League manager to get fired are as short as -303 at some online betting sites.

It seems that the only way he could keep his job is by getting a big win on Saturday. The trouble is that his players just don’t look too fired up to play soccer. No surprise there, as they’ve been struggling a lot this season, even in the games they ended up winning.

Speaking of which, most of their success in the 2021-22 season is owed to Ronaldo. However, there are rumors that CR7 has had enough with the manager. That said, we might not see him performing at his best.

Apart from a bad atmosphere in the locker room, Manchester United has another major problem – some of their key players will miss the Tottenham game. Defender Raphael Varane is out due to an injury, while midfielder Paul Pogba is suspended.