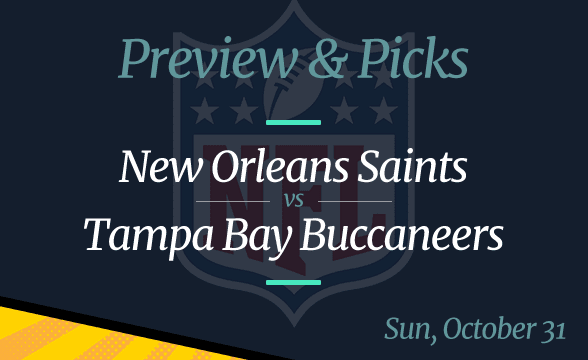 The New Orleans Saints won both games against their divisional rivals in the 2020 regular season but then lost to the Tampa Bay Buccaneers in the Playoffs. Oddsmakers believe another defeat is on the way for the Louisiana franchise.

Tampa Bay is coming into Week 8 as a six-point favorite, which is no surprise given the fact that Tom Brady and Co. have been nothing short of phenomenal so far. They rank among the top 10 NFL teams in both defense and offense.

The Saints, meanwhile, have been brilliant in the defense, while their offense hasn’t been scoring too many points. The reason is obvious – this is the first season in years that Drew Brees is not their signal-caller.

Instead, the Saints’ QB is Jameis Winston, who used to play for the Bucks in the past. Can he get revenge against his former team? Let’s find out!

All odds are per DraftKings as of October 28.

The Buccaneers are 1-6 on the season, with their only defeat happening in LA against the Rams. The game in question happened in Week 3, but since then, the Bucs have been on a roll with four straight wins.

What’s amazing about this team is that they seem to be great in all aspects of the game. Their offense has scored more points than anyone else in the NFL. Their tally after seven games is 233 points.

The Bucs’ defense has also been alright, with just 147 points conceded in total. What’s really impressive is that there’s only one game in which they conceded more than 20 – the one against the Rams.

Now that they’re facing a not-too-productive Saints offense, it’s only logical to assume they’re not going to allow 20+ again.

Of all the NFL teams that have a win rate of over .500, the Saints have the worst offense. In six games, they’ve scored a total of 140 points.

Sure, they’ve had a bye week, meaning that they’ve played one game fewer than most other teams, but the fact is that they do not look very dangerous in the offense.

Jameis Winston is not a bad quarterback, but the guy just doesn’t look capable of winning big games on his own.

On the bright side, the Saints seem to have turned into an ultra-defensive team that doesn’t give away points easily. Truth be told, they haven’t still faced such a strong offense as the one of the Bucs. The only exception is Green Bay in Week 1, but that game can be seen as a glitch in the NFL matrix.

Against the Bucs, they’re bound to concede more points than usual. Their average is 16.83 points per game, but we’ll probably see Tom Brady and the Bucs offense scoring much more than that.

What about the Saints’ offense? They’ll probably stay around their average. What this all means is that the Bucs are in for a relatively easy win at Superdome.

Pick: Tampa Bay Buccaneers to win and cover the spread; over 50 might hit.