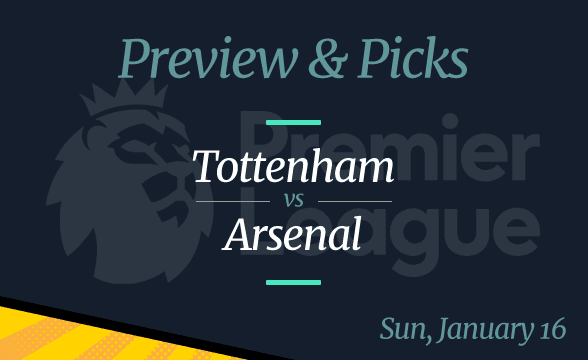 Arsenal and Tottenham are occupying fifth and sixth place in the Premier League table respectively, with just two points separating them. However, due to COVID-19 issues, Tottenham had a couple of games postponed, meaning that the Spurs have two matches fewer than the Gunners.

What this means is that if they win on Sunday, Tottenham will overtake Arsenal’s spot. And if the Spurs continue winning in the future, they will get into the Top 4. Of course, it’s easier said than done, but oddsmakers seem to have faith in this team.

All odds are per FanDuel as of January 13.

Can Harry Kane Continue His Dominance in the North London Derby?

Tottenham lost 1-0 to Chelsea on Wednesday in the Carabao Cup after failing to make their chances count. The Spurs captain Harry Kane had several goal attempts but failed to score. To be fair, he did hit the net once but the goal was ruled out due to offside.

As a result, Kane’s tally remained 12 goals in 28 games in all competitions. That might not seem to bad, but his record in the 2021-22 Premier League is just four goals in 17 matches.

On the bright side, Kane has a fantastic record against Arsenal. In fact, he is the North London Derby top-scorer having scored a total of 11 goals thus far. If he could score again, it would help his team tremendously.

Actually, the skipper will need to step up ASAP and improve his stats. This goes especially because Tottenham’s most prolific scorer in the league – Heung-Min Son – is out with an injury.

Undermanned Arsenal Hoping for the First Win in 2022

Arsenal is still without a win in 2022. The Gunners lost to Manchester City in the first Premier League round of the year, followed by a shocking defeat to Nottingham Forrest in the FA Cup.

What needs to worry their fans is that it doesn’t look very likely Arsenal is going to get back on the winning track this weekend. The reason is that Mikel Arteta’s roster is seriously undermanned ahead of the clash with Tottenham.

Granit Xhaka is sick, while Emile Smith-Rowe and Takehiro Tomiyasu are both injured. On top of that, Arsenal will miss another four players who are taking part in the African Cup of Nations with their national teams. The men in question are:

According to a study by the research company Censuswide, 35% of university students in the UK have borrowed money to gamble at least once. This has sparked concerns about young people exhibiting signs of gambling harm. The Results of Censuswide’s Survey The survey was commissioned by the Young Gamers and Gamblers Education Trust and Gamstop, […]

PickGuru Forays Into the UK With an Exciting Jackpot Offering

PickGuru, a social betting platform describing itself as an exciting and ambitious social gaming disruptor is now available to bettors in the United Kingdom. PickGuru Launches a Game To celebrate the occasion, PickGuru has offered local punters a tempting $1.36 million jackpot for its UltimateGuru game. UltimateGuru is a prediction game that will have fans […]

The sports data and technology company Genius Sports has agreed to expand its pre-existing partnership with the British online gambling company bet365. Genius Sports to Provide More Data to Bet365 The expanded deal will see Genius Sports power bet365 with an expanded streaming solution that will provide diverse new content. Furthermore, the provider will also […]

Novibet has tapped Giannis Papastamou as its new head of customer compliance, amid the brand’s global push and rapid expansion of active players and audiences. In his new position, Papastamou will be responsible for offering strategic guidance for Novibet and helping the brand navigate an increasingly difficult legal landscape that puts the onus on operators […]