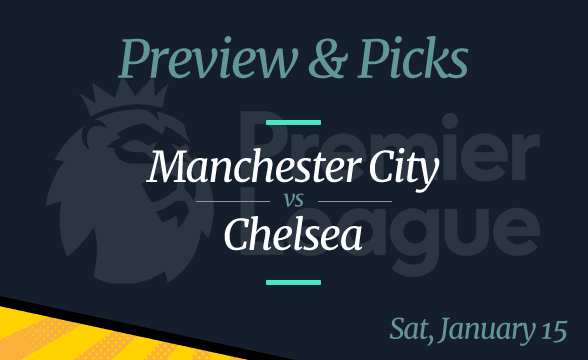 Manchester City vs Chelsea is a replay of the 2021 Champions League final, which the London club won. This time, the two foes meet in the English Premier League, and the team from the North of England is expected to win.

If they do it, the Sky Blues will create a 13-point gap between them and Chelsea at the top of the Premier League table. If Man City doesn’t win on Saturday, not only will Chelsea get closer to the #1 position but it would give Liverpool a chance to challenge the title as well.

Knowing all this, you understand why the Manchester City vs Chelsea game is of utmost importance for both sides. In turn, this means fun is guaranteed for Premier League fans.

But, what about the bettors, are they going to have a successful day? If you’re one of them, reading our betting preview could prove essential for choosing the right picks on Saturday.

All odds are per FanDuel as of January 13.

Saturday’s game is going to be the toughest challenge for Sky Blues in the first quarter of 2022. It’s not just because Chelsea is one of City’s main competitors for the Premier League title; it’s also because Pep Guardiola’s team has a pretty easy schedule ahead.

After the Manchester City vs Chelsea game, their next three Premier League opponents are Southampton, Brentford, and Norwich. Man City is expected to win those three with ease.

What this means is that with a bit of luck, this team could create such a large point gap that its rivals will not be able to close it by the end of the season. This way, Manchester City would be able to focus on what seems to matter the most to the club owners – the Champions League title.

For all these reasons, it’s clear that they have the motivation to win on Saturday, but do they have the manpower to do it? Sure they do! After all, this team isn’t sitting at the top of the Premier League table by accident.

Further, Man City has the best score differential (53-13). The Sky Blues have scored more than anyone else in the league, while also conceding fewer goals than all the others.

Chelsea’s first-choice goalie Edouard Mendy has recently made it to the final three-man shortlist for the Best Goalkeeper award. No surprise there as he’s been an integral part of his team since making London his home in 2020. Unfortunately for Chelsea, he’s not going to be between the posts on Saturday.

It’s because Mendy is with his national team at the AFCON, meaning that Kepa Arrizabalaga will have to make his only second start of the season. Should this worry Chelsea? It should and not just because Kepa hasn’t been getting much playing time.

It’s also because the backup goalie is likely to have a lot of work to do against City. The reason is that several of Chelsea’s key defenders are either out or struggling with fitness. Trevoh Chalobah, Ben Chilwell, and Reece James are definitely out, while Thiago Silva might not be 100% fit after missing two games due to COVID.

It’s basically the same situation when it comes to one of Chelsea’s best players, N’golo Kante whose job usually involves breaking the opposition attacks. With so many problems on their hands, the London Blues might be heading towards a disaster.

Smoking, PILOT Bill Continue to Be Center of Attention in Atlantic City