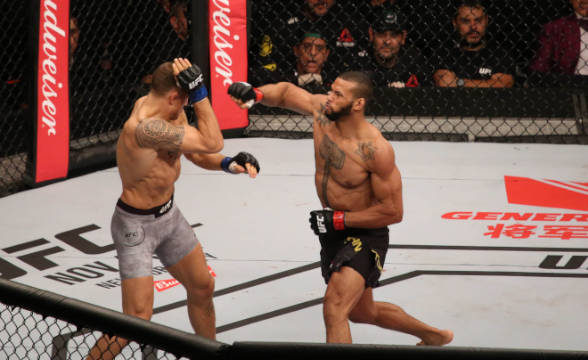 Thiago Santos (22-10) is a former UFC Light Heavyweight title challenger who lost the title bout to GOAT candidate Jon Jones. That’s when the trouble started for Marreta who’s 1-3 since that fight. Are we going to see him improve his record on Saturday, August 6 at UFC on ESPN 40? Not if you ask online bookmakers, who think Santos’ opponent Jamahal Hill is going to triumph.

All odds are per FanDuel as of August 1.

Thiago Santos Trying to Stay Relevant in the UFC

The Brazilian Jiu-Jitsu, Muay Thai, and Capoeira expert started his MMA journey back in 2010. After going 8-1 in several different promotions, he inked a deal with the UFC in 2013. While fighting under the banner of the world’s biggest MMA promotion, he went on to win 13 fights (while losing just four) before getting a chance to fight for the UFC Light Heavyweight championship in 2019.

Unfortunately for Santos, his opponent was legendary Jon Jones who was 25-1-1 at the time. It’s needless to say that Jones beat him, but what’s impressive is that Santos took the fight to the final bell, eventually losing by a split decision. The fight remains the only instance when Jones won by split decision in the UFC.

Santos did well in the Jones fight, but he then hit a rough patch, losing three of the following four fights. The only fight he won since then was against his fellow Brazilian Johnny Walker, whom he defeated by unanimous decision in a fight that many MMA fans described as a snooze fest – the two fighters landed fewer than 100 strikes throughout the fight.

In his most recent fight, Santos lost to Magomed Ankalaev by unanimous decision. However, this fight wasn’t as boring as the one with Johnny Walker. In fact, we saw Santos knock his opponent down to the floor early on in the fight. Unfortunately for him, Ankalaev bounced back and did well enough to turn it in his favor.

Although he might not be the UFC title material (at least not yet), Jamahal Hill is an exciting fighter whose fights are fun to watch. He is 10-1-1 in his professional MMA career with four wins in the UFC. Hill’s only defeat happened a year ago when he lost to Paul Craig by TKO. What’s interesting is that Hill broke his arm in that bout but continued to fight with the referee not realizing what’s happened.

His bravery and defiance are what made UFC fans fall in love with him, but those aren’t the only reasons. Another, even important reason why MMA aficionados adore this guy is that he’s a great striker who loves finishing his fight with KO/TKO.

The evidence of this is that each of his previous five UFC fights finished within the distance, with him winning three of those by KO/TKO. Actually, he won four of them, but the UFC declared one fight no contest due to Hill testing positive for marijuana.

The best thing is that both of his previous two fights saw him win by KO, for which he earned the Performance of the Night bonus each time.

Our prediction for the main event of UFC on ESPN 40 is that this is going to be an interesting fight. Thiago Santos, who is 38 already is probably going to try and show the world that he can still put on a show. When it comes to Jamahal Hill, putting on a spectacle is the way this guy fights.

That said, we’re almost 100% certain this fight will not go the distance, but who will finish who? Although anything can happen in a fight like this, our vote goes to Hill.