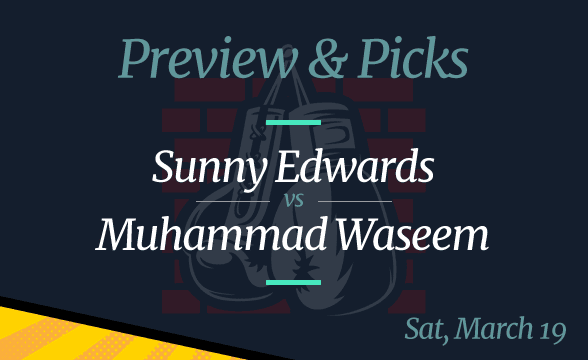 Sunny Edwards and Muhammad Waseem lock horns in a battle for the IBF flyweight title. The bout is to take place at Duty-Free Tennis Stadium in Dubai, UAE on Saturday, March 19.

Edwards, who is the defending champion, is seen as a huge favorite to keep the championship belt in his possession. With the odds of -2500, online sportsbooks think he’s almost certain to defend the title for the second time after winning it in April 2021.

The first time he defended it was last December against Jayson Mama, in a bout in which Edwards was a -323 favorite. That said, things do not look good for Muhammad Waseem, although the 34-year-old Pakistani mustn’t be underestimated.

After all, the guy has only one loss in his professional career, which happened when he fought Moruti Mthalane for the vacant IBF flyweight title. Maybe he’ll have more luck in his second title bout?

Odds taken from DraftKings on March 17.

The UK pugilist is 17-0 in his professional career, during which we saw him get ahold of six major titles (IBF and WBO), including the IBF flyweight title which he defends on Saturday. What he doesn’t’ have in his collection is a WBC championship belt. However, he could get a shot at one if he beats Waseem.

According to promoter Richard Schaefer, Edwards would likely get to fight WBC champion Julio Cesar Martinez in a unification bout later in 2022. The only condition is that he doesn’t end up without his IBF title this weekend.

Getting a chance to fight the #1 ranked flyweight boxer on the planet is certainly good motivation for Edwards to take the Waseem bout seriously.

Muhammad Waseem is seen as a massive underdog in Saturday’s bout despite the fact that his professional record is nothing short of impressive. With 12 wins and just one loss, Waseem deserved to get a shot at the title.

Speaking of which, he already had one attempt on the IBF flyweight title but failed to take it. It happened in summer 2018 when Mthalane beat him by unanimous decision. That was Waseem’s highest-profile fight, with all the rest being fought against boxers who aren’t rated as highly as the South African legend.

The good news for Waseem is that he is going to have fan support on his side. The thing is that the title bout is taking place in Dubai, the city in which he won four of his previous five fights.

The fact that Sunny Edwards odds are -2500 shows that he needs to be thought of as the favorite. The reigning champ is simply a better pugilist than the challenger, although we could see a much fiercer battle than what the odds suggest.

In fact, the fight could easily last until the final bell. Waseem will have his fans to cheer him on, which should give him the energy to endure all 12 rounds. Further, his opponent is famous as a boxer who never rushes things. Evidence of this is that 13 of Edwards’ 17 professional bouts were decided by the judges.