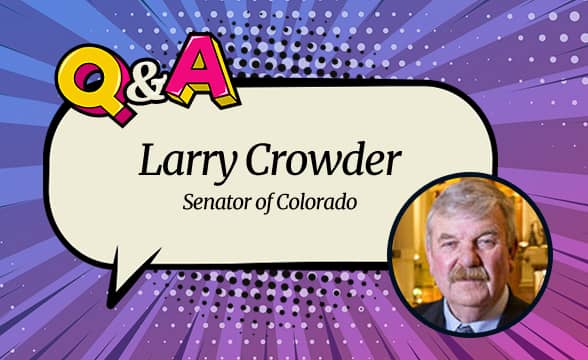 Senator Crowder, thank you so much for your time. We understand and respect your position on sports betting legalization in the State of Colorado. In the following list of questions, we have tried to select points that you have raised at some point in the past regarding the legalization of the sports betting industry in the state. Just to clarify – you are against it.

Q: We will start with the more difficult questions. Do you feel that Colorado currently has a black market for sports betting? The American Gaming Association (AGA) estimates that there are some $150 billion going in offshore revenue.

Q: When H.B. 1327 was introduced in May, you stated your position clearly. Your words on the occasion were ‘Why do you want to make people poorer?’. We agree that oftentimes inadequate percentage of the revenue is forwarded to fighting the problems that gambling causes in the first place. Do you see a variant where sports betting can be made viable?

Sen. Crowder: Whether some gambles or not, to me, is not the issue. By implementing Gamblers Anonymous as part of this bill indicates that there will be a number of addictive players and the realization that gambling is designed to place favor with the entities who operate these establishments to produce losers. For $29 million dollar tax this would relate to $290 million that would need to be lost. The voters in the past have stated by their vote that the mountain towns are allowable so placing the convenience of using an iPhone is an easy way to lose money.

Q: If sports betting isn’t legalized but there are still people gambling offshore, how do you feel this issue should be addressed? Should the state seek to completely cut off access to such websites in the first place?

Sen. Crowder: I do not believe, as a state there is no action to be taken. If the federal government would make this a nationwide issue to stop offshore, then I would support. After all the figure you quoted of $150 billion is nationwide and unverified.

Q: Do you think that if neighboring states legalize the activity it would be practical for Colorado to keep a neutral attitude and not introduce legal sports betting itself?

Sen. Crowder: What neighboring state do is their business. I for one do not adhere to the idea of the Colorado State government promoting gambling. I also understand the water issues we face, but this should be done as a whole of the taxpayers, instead of relying on people of this state losing money to pay for this.

Oscar Isaac to Star in Paul Schrader's "The Card Counter"

NatWest to Offer Help to Gambling Addicts in Partnership with GamCare