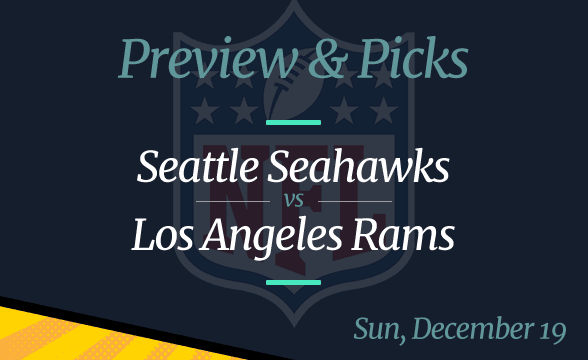 The two NFC West rivals still don’t know what their postseason destiny is. The Seattle Seahawks still have a chance to get to the postseason, although such a scenario looks very improbable. The reason is that their record is 5-8 and there are only four games left to be played.

One of those games is the Week 15 game with the Los Angeles Rams, a team that’s just one step away from securing a Wild Card berth. Actually, the Rams even have a chance to win their division – they’re just one win short of the #1 position, currently occupied by the Arizona Cardinals.

Of course, for that to happen, the Cards need to slip at least once before the end of the season. At the same time, the Rams need to continue winning.

All odds are per FanDuel as of December 16.

Can Russ Wilson and Co. Outsmart the Rams Defense?

The Seahawks are among the worst teams in the entire league when it comes to the scoring offense, with just 272 points in 13 games. There is an explanation for that – their starting quarterback was out for several games due to a finger injury.

The man in question is Russell Wilson, a franchise legend, who’s one of the best QBs in the NFL without any doubt. He was injured, but now he’s back. Russ made his comeback a few rounds ago, but needed time to get back in the right form.

After two games with no passing touchdowns, he finally started throwing them in Week 12. He threw for two TDs that week and the same happened in the next two games.

His form might be on the rise, but the question is will he be able to do much against the Rams, who have one of the best defensive teams in the league.

Rams Coming Off a Big Win Over Divisional Rivals

Monday Night Football brought us a clash of two NFC West Giants. The Rams traveled to Arizona to take on the Cardinals and after a fierce battle on the field, got themselves a 30-23 win.

As a result, the Rams are now 9-4 on the season, which should be good enough for a Wild Card berth. However, if they win a few more games by the end of the season, they could even with the division. As things stand, the Cardinals have only one more win than them ahead of Week 15.

The trouble is that the Rams have a tough fixture list before them. In addition to the Seahawks game, they also need to play against the Minnesota Vikings, Baltimore Ravens, and San Francisco 49ers. The good news for the Rams is that they surely have the manpower to win all those games.

Picks: Los Angeles Rams to win and cover the spread; under to hit