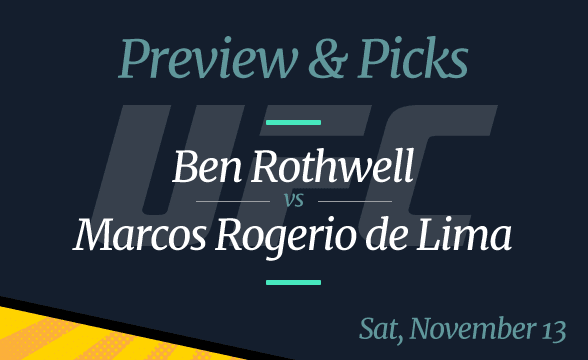 Ben Rothwell and Marcos Rogerio de Lima have been fighting under the UFC banner for years, but UFC Vegas 42 is going to be the first event when they meet inside the octagon. The clash between the two heavyweight veterans will serve as the co-main bout of the event.

Each fighter has already fought (and won) one fight in 2021. Rothwell defeated Chris Barnett in May, thus setting his career record to 39-13. De Lima’s most recent fight happened the same month – he won against Maurice Greene, the result of which is that his current record is 18-7.

All odds are per DraftKings as of November 11.

Rothwell has won 28 of his fights by knockout/technical knockout. The most recent of those was a win over Dutch 7-feet giant Stefan Struve, which marked the end of Big Ben’s losing streak. Before the KO win, we saw him losing four straight UFC bouts.

Since beating Struve, Rothwell went on to win another two fights, while losing one in-between. The defeat in question happened against Marcin Tybura. The Polish fighter got the win via unanimous decision after three rounds.

It was Rothwell’s seventh loss through this method; the other losses happened by knockout (4) and submission (2). Despite being already 40, Rothwell looks durable enough to take the fight to distance. The guy is famous for a very strong chin, meaning that he should be able to remain on his feet regardless of how many punches his opponent throws on Saturday.

De Lima Determined to Prove His Worth

The Brazilian fighter has been fighting for the UFC since 2014, but he still hasn’t locked horns with such a successful fighter as Rothwell. Does this mean that he has no chance against him? Of course not. De Lima just needs to fight wisely.

The guy is famously a fantastic puncher, as evident from the fact that 13 of his 18 wins happened by knockout. However, de Lima is also famous for his impatience. Rather than taking a tactical approach to the fight, he usually tries to finish it ASAP.

Unfortunately for him, such a strategy proved wrong on several occasions. In fact, all of his four losses in the UFC happened when the opponent tricked him into a grappling battle – de Lima lost each time by submission.

Bookies see Big Ben as the favorite in the co-main event of UFC Vegas 42. However, we might be in for a surprise in this bout. De Lima might not have as impressive a portfolio as Rothwell, but he definitely has the motivation to do his very best on Sunday.

Codere Shares Its Operating Results for Q3 of 2021, Shows Signs of Recovery