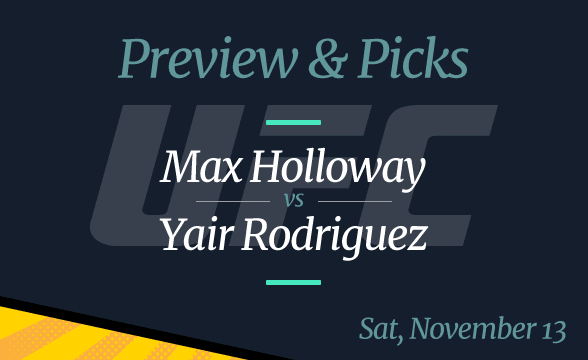 The UFC is back in Las Vegas with an event headlined by a fight between Max Holloway and Yair Rodriguez. Labeled UFC Vegas 42, the event is expected to be a super-exciting affair despite the fact that there are no title bouts on the card.

Nevertheless, the headliner fight should bring MMA fans plenty of excitement, considering that it pits two fighters with impressive professional records. Holloway is coming into the octagon with a 22-6 record, thanks to which he’s currently #1 in the UFC Featherweight Rankings. His opponent is two spots below in the rankings with a 13-2 record.

All odds are per DraftKings as of November 11.

Why is Holloway Such a Strong Favorite?

Holloway is coming off a win over Calvin Kattar in January, which put an end to his losing streak. Before that, he suffered back-to-back losses to Alexander Volkanovski. The first saw Holloway losing his UFC Featherweight title; the other one saw him failing to reclaim it.

The second fight was filled with controversies as his opponent won it by a rather controversial split decision. Nevertheless, the 29-year-old Hawaii native is likely to get another shot on the title in the future. Of course, for that to happen, he will need to continue to put on good performances in the octagon.

What this means is that winning against Rodriguez is a must for this guy. Beating his next opponent shouldn’t be much of a challenge, considering that Rodriguez hasn’t fought in more than two years.

First UFC Fight for Rodriguez Since 2019

October 18, 2019 – that’s when Rodriguez fought a UFC fight the last time. If you’re wondering what made him stay outside the octagon for more than two years, the answer is injuries, as well as a USADA suspension.

Although he didn’t test positive for banned substances, Rodriguez got suspended by the agency for missing a couple of drug tests.

Before all that happened, Rodriguez was on a pretty impressive streak with eight wins in ten UFC fights. One of those was declared no contest due to an accidental eye poke of his opponent Jeremy Stephens in September 2019. A month later, the two met again and Rodriguez won by unanimous decision.

The win didn’t come as much of a surprise as his opponent already had 16 losses under his belt. Speaking of Rodriguez’s previous opponents, most of them are fighters with not-too-impressive professional records. In fact, this guy still hasn’t fought such as high-profile fighter as Holloway.

The Hawaiian fighter is the betting favorite for a reason – he’s a much better fighter than his Mexican opponent. That said, anything but an easy win for Holloway would be a major suspire.

But, what does “easy” mean in this context? It means that we should see Holloway finishing the fight inside the distance, probably with a KO/TKO.