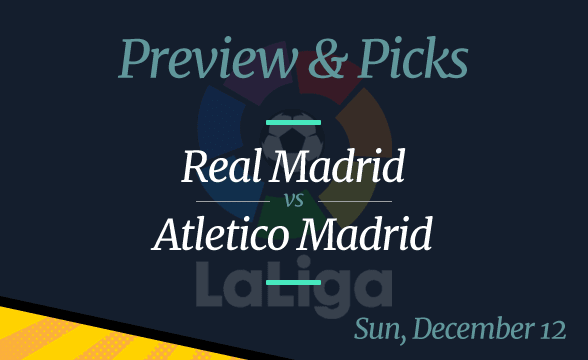 In Round 17 of La Liga, we’ll see a duel between the two biggest clubs from the Spanish capital – Real Madrid and Atletico Madrid.

El Derbi Madrileño a.k.a. the Madrid Derby is one of the biggest rivalries in Spanish soccer. This Sunday, Los Blancos and Atleti will have their first clash of the 2021-22 season.

The two will lock horns at Real Madrid’s turf, Estadio Santiago Bernabéu. That’s where the hosts are without a single loss to Atleti since 2014. Further, Los Blancos are on a five-game win streak at home. This explains why oddsmakers think of them as the favorites.

However, the odds aren’t as short as one would imagine. The reason behind that is that Los Blancos will be without their best player Karim Benzema on Sunday.

Los Blancos are at the very top of the table in the Spanish La Liga. Their record is 12-3-1 with a score differential of 37-15. Ahead of Round 17, they have eight points more than the second-placed team (Real Betis). Further, they’re 10 points better than Atletico Madrid.

What’s even more impressive is that they’re without a single loss in all competition since early October, with nine straight wins. The most recent of those happened last Tuesday when they defeated Inter in the Champions League.

The score was 2-0, which came as a sort of a surprise knowing that Real was without its best player, Karim Benzema. The French striker, who’s the scoring leader in La Liga, got injured a week ago.

Luckily for Real, Junior Vinicius is 100% fit. He’s currently #2 in the list of top scorers of La Liga and is going to be one of the main threats to Atletico’s goal.

Atletico Madrid hasn’t been playing great lately. However, they’re coming off a big win over Porto in the Champions League. Even though they were seriously banged up in that game, with just one natural center-back, they managed to beat the opponents 3-1.

Speaking of injuries, the worst seems to be over for Atleti. There are several first-team players who should be back by Sunday, including several defenders.

On top of that, Atletico’s top scorer Luis Suarez also seems ready to spend more minutes on the pitch. The last time he played the whole 90 minutes for Atleti was back in October.

With him back, the winner of the 2020-21 La Liga would definitely stand a chance against Real. They might not be able to grab all three points, but a draw does seem achievable.

Picks: Real Madrid and Atletico Madrid to draw; under 2.5 goals to hit