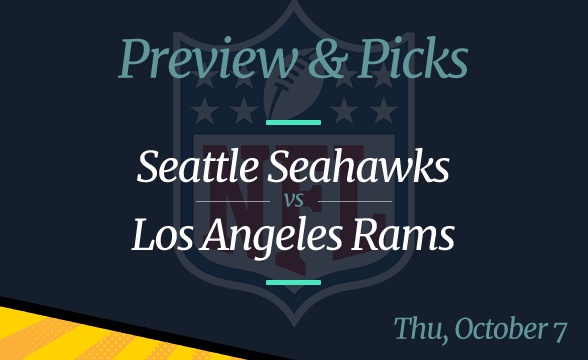 The Los Angeles Rams suffered their first loss of the season last Sunday at their own turf. The roar of their fans from the stands of SoFi Stadium did not help the Rams to avoid getting ripped apart by the Arizona Cardinals.

The Rams have a chance to get back on the winning track on Thursday night when they meet with the Seattle Seahawks in Washington State. The Seahawks have already beaten a team from California – in Week 4, they beat the 49ers in San Francisco.

All odds are per DraftKings as October 4.

Although it’s only October, the TNF Week 5 game means a lot for these two teams, as it has playoff implications. Right now, the Rams are 3-1, while the Seahawks are 2-2, the same as the 49ers. The only NFC West team that has a 100% record after four weeks is the Arizona Cardinals.

What all this means is that all four are still in the competition for the divisional title. As the Cards have an early advantage, the other three teams now have to step up in order to keep up with them. That said, you can be sure that neither team will lack any motivation in the TNF game, the same as was the case in their previous couple of meetings.

In the 2020 NFL season, we saw three Rams vs Seahawks clashes. Two happened in the regular season, with each team getting a win on their turf. Then, in the Wild Card Game, the Rams beat the Seahawks in Seattle.

Last season, Russell Wilson did not have a great time against the Rams. However, since the start of the 2021 season, the Seahawks QB has been fabulous. He was the man who impressed against the Niners last weekend, with two passing TDs and one rushing TD.

Thanks to his input, the Seahawks were able to put an end to their losing streak, ending it at two straight defeats.

When it comes to the Rams QB, Matt Stafford, his record at Seattle is 0-3. However, all those three defeats happened while he was wearing the Detroit Lions jersey. With much more talented teammates by his side, Stafford could get his first win in Washington State.

What’s worrying, however, is that he’s coming off a not too impressive performance against the Arizona Cardinals. His states weren’t too bad in that game – 26-of-41 for 280 yards, with an 89.5 passer rating – however, he didn’t make enough key passes.

In fact, only two of his passes resulted in a touchdown. I say “only” because, in the game before, he passed for four touchdowns against the Tampa Bay Buccaneers.

Will Stafford do better this time? Probably, and so should his teammates, meaning that we should see the Rams going 4-1.

Pick: Los Angeles Rams to win and cover the spread; we should see more points than what the bookies think.

For those of you who have got accustomed to European and North American golf terrains, there is a big change of scenery coming this Wednesday, October 20. The ZOZO Championship is playing out of Inzai, Japan and it will feature a number of strong contenders as per DraftKings’ latest odds. Xander Schauffele is naturally in […]