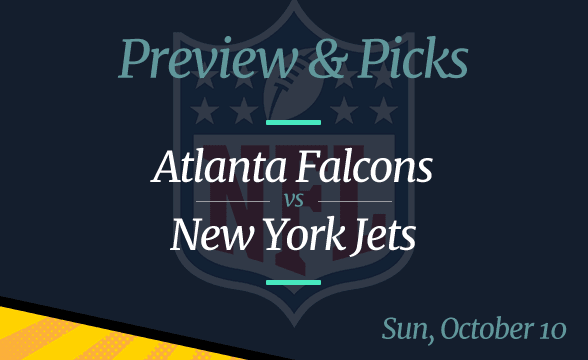 The NFL is going to England – the Week 5 game between the New York Jets and the Atlanta Falcons is taking place at Tottenham Hotspur Stadium in London.

Ahead of Week 5, both teams are 1-3, with the Jets winning their first game of the season last weekend. They beat the Tennessee Titans 27-24 after overtime. Meanwhile, the Falcons lost to the Washington Football Team 34-30.

All odds are per DraftKings as October 4.

Although the Titans did have some injury problems in Week 4, they were big pre-game favorites against the Jets. In fact, the oddsmakers were giving a six-point spread ahead of the game.

Still, the Jets managed to grab an overtime win. It was a decent performance by the NY team, but the Titans did make plenty of mistakes in that game.

If they want to continue winning, the Jets can’t rely on luck. Instead, they need to up their game, especially in the offense. With only 47 points scored in the four games, the Jets have the worst offense in the entire league.

Their defense, however, hasn’t been that bad. In fact, they still haven’t conceded more than 30 points in a game. Their opponent, the Falcons, allowed at least 30 in each of their three losses.

What’s Going on With Atlanta’s Defense?

The Falcons have the worst defense in the league. So far, they’ve conceded a total of 128 points, which is 34 points more than the Jets.

They allowed 48 against the Tampa Bay Buccaneers, which isn’t too surprising. However, they also conceded 32 against the Philadelphia Eagles and 34 against the WFT.

They should be able to improve their defensive stats on Sunday against the Jets, the game which they’re expected to win. The oddsmakers see the Falcons as a five-point favorite, suggesting a very close game.

Betting against the spread might be the right solution for this game. The Jets are probably in a better emotional state than the Falcons ahead of the trip to the UK.

Furthermore, it really seems like it’s time for Zach Wilson to start producing more. He might be a rookie, but the Jets’ starting QB has the quality to outsmart the Falcons defense.

Pick: Atlanta Falcons +4.5 and under 47 should hit

British international Internet-based market research and data analytics firm YouGov has posted a quarterly report about the state of the US gambling market. According to YouGov, the industry is facing one of its biggest threats yet in the face of the rising costs of living which may affect casinos in the country. YouGov Analyzed the […]