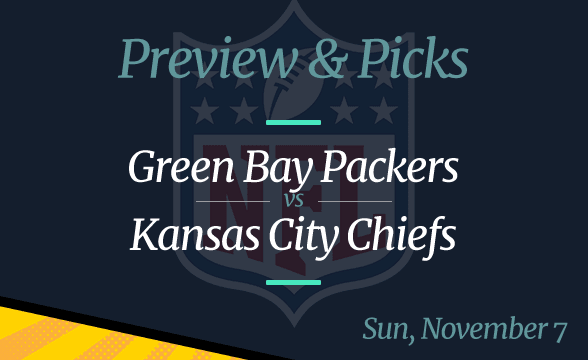 Before the start of the 2021 season, Patrick Mahomes and Aaron Rodgers were sharing the top spot in the list of MVP favorites. However, eight weeks into the season, they’ve both dropped down in that list. This goes especially for the Kansas City Chiefs QB, although it’s not only his fault.

Actually, Mahomes has been decent so far, but that hasn’t helped his team much. Due to their horrendous defense, the Chiefs are now 4-4. Their record could become even worst this Sunday when they face one of the NFL’s best offenses.

Thanks to Aaron Rodgers and the Packers’ offense, Green Bay is currently 7-1, with all wins since Week 1. Can they extend that series? Betting odds suggest they might, but you never know when these two rivals are concerned.

All odds are per BetMGM as of November 2.

Packers Bearing the Role of the Favorite in Week 9

When the odds went up, Kansas City was a clear favorite. However, at the moment of writing, the teams are given even chances, with some online bookmakers even favoring the Packers.

This shouldn’t come as too much of a surprise, knowing how brilliant they’ve been lately. The Packers have won each of their seven previous matches, with the latest in the streak being against the team with a 100% win-rate before that – the Arizona Cardinals.

There is also the fact that the Packers will simply have more time to recuperate before the Week 9 match with the Chiefs. The Packers have had their last game last Thursday; the Chiefs had to play their Week 8 game on Monday night.

Still, all of that would mean nothing if the Packers’ key player hasn’t been playing top football. Obviously, the man in question is their quarterback Aaron Rodgers, who already has a total of 17 TDs and 1,894 yards to his name so far.

What’s even more impressive is that he’s managed to make at least two touchdowns per game in their last seven matches. Furthermore, he was successful in evading interceptions for three weeks straight.

Sure, it’s common knowledge that the Packers are powerful in the offense, but their defense has also been superb in 2021. This team has conceded 167 points in eight games, which accounts for under 20 points per game on average. The question is, do the Chiefs have what it takes to ruin that stat for the Packers?

Unimpressive Chiefs Need to Straighten Themselves Up

They are 4-4 on the season, which is horrible for a team that was the #1 Super Bowl favorite before the beginning of the season. What’s even more worrying is that even in the games they won in 2021, they weren’t too impressive.

A good example is the game against the New York Giants, who they played on Monday night. Although they won in the end, the score shows how tough the game was for them – it was 20-17 for the Chiefs, who entered the game as an 11-point favorite.

Actually, if it weren’t for their placekicker Harrison Butker, they’d end up losing that game. The thing is that at one point in the final quarter, they were three points behind the Giants.

Obviously, that’s not something a team of this quality should allow. They need to do much, much better in Week 9. It’s not just about getting to 5-4; it’s also about boosting their confidence which is probably at a very low level right now.

The good news is that they surely have the manpower to do that. Not only can Mahomes and Co. defeat the Packers, but they can do the same to literally any team in the league. They just need to start showing their power!