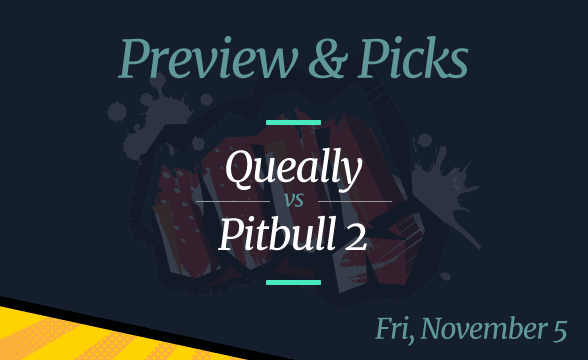 Bellator is arriving in Dublin, Ireland on Friday, November 5 to bring you the latest installment of MMA and a big main ticket fight to behold. Patricky “Pitbull” Freire and Peter Queally will face off against one another in their sequel fight with Pitbull listed at (-240) in the current odds. The underdog, Queally, is posted at (+195) which is a fairly big difference between the two, but still not enough to make the fight one-sided.

The event will be aired on Showtime in the US and YouTube in Canada at 4:30 pm EST. For those of you looking forward to a good Friday afternoon packed with fights, Bellator 270 will definitely be it. The event will feature numerous worthwhile bouts, including the one between Patrick Mix and James Gallagher where Gallagher is posted as a heavy underdog at (+300).

We also recommend taking a look at the other fights as they are very closely matched and will provide you with some spot-on betting opportunities.

Where and When Is Bellator 270: Pitbull vs Queally 2

Bellator 270 will be taking place in Dublin, Ireland on Friday, November 5. The event will be aired on Show Time in the US and on YouTube in Canada. The fights begin at 4:30 pm EST.

Prediction for Queally vs Pitbull 2

The upcoming fight is quite interesting. While Pitbull is given a great chance of sealing the fight here (-240), the previous bout between the two posted Queally as the winner. Back in May, the pair fought but the fight had to be stopped in Round 2 due to a TKO and a doctor stoppage.

Queally was quickly pronounced the winner but a rematch was scheduled soon after and it can now take place on Friday. Pitbull’s last two fights have been losses. He lost to Queally, evidently, and Tofiq Musayev before that with TKO.

On the flip side, we have Queally who has repeatedly won and has two wins in his last two fights. One against Pitbull and the other one against Ryan Scope. The odds aren’t wrong here, as all bookmakers seem to think that Pitbull will be winning this fight, but we really don’t see it happening.

It’s true that Queally got a bit lucky with his TKO stoppage, but this doesn’t mean his current form is anything to worry about. He seems to have the cardio and strength, although admittedly, he may be a little overconfident which could end up badly for him.

Pitbull’s (-240) here won’t provide you with much value, so we think it might be better to just go with Queally. He has won against Pitbull already. Plus, we believe the odds provide an awesome betting value.

Don’t Forget to Take a Look at Michael Gallagher

There will be quite a few interesting events in the upcoming bout. Looking at the fights, you can spot that there are more decent picks to be had, but none more appealing than Patrick Mix vs James Gallagher. We believe Gallagher is another heavily underestimated fighter in this one.

He is posted at (+300) and we can’t understand why. Mix is definitely a promising ace and he has posted 14-1-0 in MMA career track record so far. Gallagher on the other hand posts 11-1-0. His last loss was to Ricky Bandejas in 2018 and he has won four fights since.

However, Mix has taken on more confident and better fighters overall, which is what makes him a heavy favorite as per bookmakers’ predictions. Based on the current odds, though, we would still back Gallagher, because he simply provides a better value than anything we could wager on Mix.

Even if Mix wins, we feel confident Gallagher will have his moments in the event and he might just secure that one devastating blow that would put Mix out of the race altogether.

The dynamic and innovative global B2B betting content provider Pariplay has penned a deal with the Greek gaming tech company Kaizen Gaming. The agreement will boost Pariplay’s influence on the European gambling market. Pariplay Will Fuel Kaizen’s Offerings The deal has quickly come into fruition, leading to the implementation of Pariplay’s in-house casino games, developed by the Wizard Games team, […]