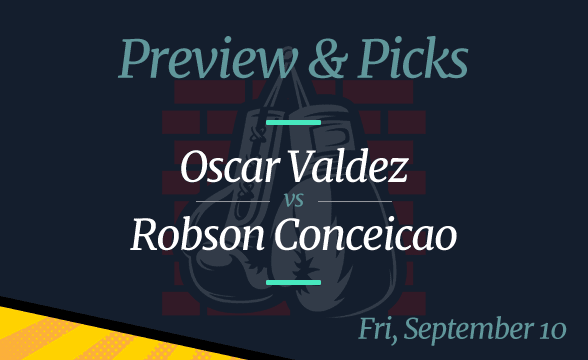 The Oscar Valdez vs Robson Conceicao bout is set for Friday, September 10 at 11 PM ET. If you are just tuning in, then it’s worth knowing that the winner of the fight will emerge as the next WBC super-featherweight title. In the case of Valdez, the fighter is going to be up for his first title defense.

The event will be broadcast on ESPN+ and will decide the new or remaining championship title both Valdez and Conceicao are keen to secure the distinction and bring it home. Whoever succeeds will be decided only hours from now.

Odds to Win Valdez vs Conceicao

When, Where and Where to Watch

The fight between Valdez and Conceicao is taking place on Friday, September 10 at 11:00 PM ET when the main card headlined by the two fighters is expected to start. You may watch the event through ESPN+, or Sky Sports if you are in the UK.

The Unknowns in Valdez vs Conceicao

There are some red flags to take into consideration with the fight still happening, albeit under a cloud of suspicion. Valdez, for one, tested positive for a performance-enhancing drug that is currently on VADA’s prohibited list of substances.

While the test stirred the spirits, the World Boxing Council decided to give a green light to the fight that will be happening at Casino Del Sol in Tucson, AZ. With Arizona just launching sports betting on Thursday, there is time for local sports bettors to place their first wager.

Valdez has denied all wrongdoing, but the world of boxing elite has questioned WBC’s motivation in the matter.

If Valdez is taking performance-enhancing drugs, that is a deplorable practice that someone of his stature should not engage in. As a fighter, though, Valdez has an impressive track record that includes 29 straight wins, with 23 wins by KO. He is now defending his lightweight title and that certainly adds pressure.

The odds seem to back him as an absolute favorite in the fight, as well. However, Conceicao and Valdez fought once before as amateurs and Conceicao managed to score a single point more against his opponent to win the 2009 Pan American Games.

A rematch is long overdue, and both fighters have come a long way, with the one to have honed his skills better likely to win.

Tale of the Tape

Conceicao Has a Spotless Record

Possessing a technical fighting style, Robson Conceicao has not been bested in the 12 years since he last fought Valdez. Where Valdez went on a road to conquer some of the biggest names in the world of boxing, Conceicao has decided to fight fewer opponents.

Valdez has put in a lot in developing his punching and stopping power whereas Conceicao has worked on his stamina. The question remains if, after all those years, the opponents have developed two distinct fighting styles that will put them at odds with each other and allow each to play to their strength.

For Conceicao, that would be extending the fight and relying on a technical victory by a sliver, whereas Valdez may be doubly motivated to KO the man who once stole his golden medal by a mere point.