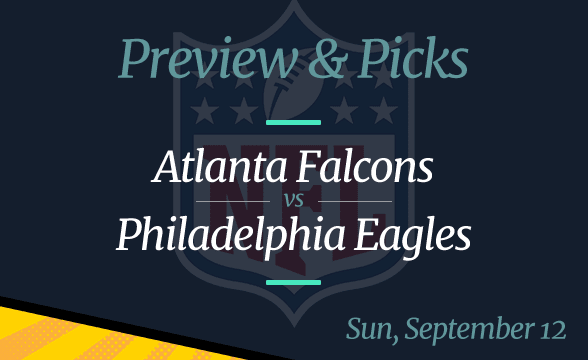 Both the Philadelphia Eagles and the Atlanta Falcons went through some serious personnel changes in the offseason. In fact, one of the biggest trade stories of 2021 was the departure of Julio Jones from the Falcons roster. Arguably Atlanta’s best receiver ever, the 7-time Pro Bowler moved to Tennessee this year. The Falcons’ new head coach Arthur Smith went the other way around.

Big changes happened in Philadelphia, as well. The Eagles now have a new head coach in Nick Sirianni, a 40-year-old who’s never been in this role before. They’re also without Carson Wentz, a quarterback who missed only 12 regular-season games from 2016 to 2020.

All odds are per MyBookie as of September 9.

Consistency is the word that comes to mind when Atlanta QB Matt Ryan is discussed. The 36-year-old has been a Falcon since 2008, missing only three games along the way. Last season, despite his team being dreadful (4-12), Ryan did okay – 4,581 passing yards, 26 touchdowns and 11 interceptions.

This season, he’s expected to boost his stats, as he should have better targets to aim his passes at. Sure, Jones is no longer there, but the legendary receiver didn’t feature much in 2020 either due to serious injury problems.

In 2021, Falcons receivers might not be the best in the league, but there are some really talented players in this position. Calvin Ridley is the best example, the WR who ended up in Second-team All-Pro in 2020.

Furthermore, in the Eagles vs Falcons game, we might see a rookie tight end on the field. The man in question is Kyle Pitts, their fourth overall pick in the 2021 Draft.

All Eyes on Sophomore Jalen Hurts

Over in Philadelphia, it’s all about their second-year quarterback Jalen Hurts. The guy took over the starting position from long-term QB Carson Wentz in Week 13 of the 2020 season. When Wentz moved to Indianapolis, everyone thought the Eagles were going to go shopping for a new starting quarterback.

Apparently, they were looking to sign Deshaun Watson from Houston but then the nasty stories about sexual misconduct started emerging. As a result, the Eagles gave up on him, giving the job to Hurts.

Sure, he did well in the final stages of the 2020 season, but we’ll probably wait a few more years until he becomes an elite quarterback.

Pretty much the same goes for many other Eagles players, including WR Devonta Smith. The tenth overall pick in this year’s draft, Smith came to Philadelphia as the reigning Heisman Trophy winner.

Pick: Atlanta Falcons to win and cover the spread. The game should go Under.

Oscar Valdez vs Robson Conceicao Odds, Date, and Where to Watch