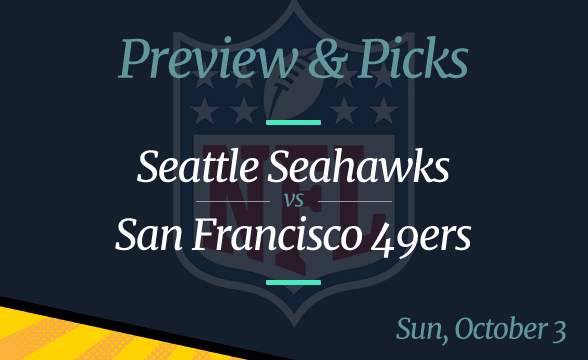 Things are heating up in NFC West, where the LA Rams and the Arizona Cardinals are still undefeated. The two meet on Sunday, meaning that one of them will get to 3-1.

That’s good news for the San Francisco 49ers (2-1), who could get to 3-1 with a win in Week 4. The bad news for them is that they’re taking on another NFC West team, the Seattle Seahawks.

Even though the Seahawks are 1-2 at the moment, they surely have plenty of talent on the roster. Evidence of this is that they beat the Niners both times in 2020.

All odds are per DraftKings as of September 27.

The Seahawks Need to Work on Their Defense

Seattle leads the all-time series against San Francisco 28-17, with 15 of those wins happening since Russel Wilson’s been their quarterback. Furthermore, they won eight of the past ten games against the Niners, including the two played in the 2020 NFL season.

In Week 4 of the 2021 season, it’s San Francisco that’s seen as the favorite. The reason isn’t just that the Niners have been playing relatively well so far; it’s also because the Seahawks’ defense has been horrendous.

The final score sure looks bad, but it could’ve been even worse. The Seahawks looked anemic against Kirk Cousins, whom we saw making three TD passes in the first half.

The Seahawks offense didn’t do much better either. They started reasonably well with ten points in the first quarter and seven in the second. However, they scored zero points in the other half of the game.

The Niners had a one-point lead until the very last second of the game against the Green Bay Packers, but then placekicker Mason Crosby scored a field goal.

Nevertheless, San Francisco players should feel proud of their performance against one of the best offenses in the league. They should also feel optimistic ahead of Week 4, as they’re now taking on a team that doesn’t seem as lethal as the Packers.

The Seahawks did score a lot of points against the Niners in 2020 (60 in two games), but this time, San Francisco’s defense looks much stronger. After all, this year, they got Nick Bosa in the team. One of the NFL’s best edges had to miss 14 games in 2020 due to an injury, but this season, he’s back and he’s been phenomenal thus far.

Pick: San Francisco 49ers to win and cover the spread; we shouldn’t see too many points.