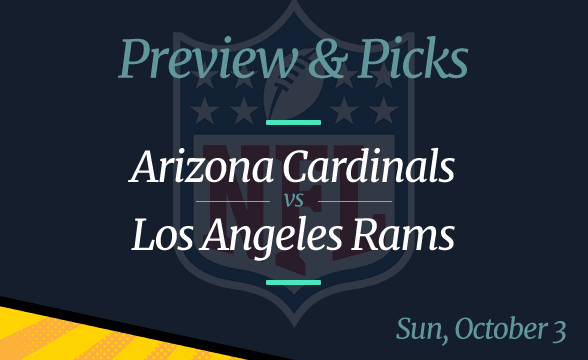 Both have been superb so far, especially on offense. In fact, the Cardinals are the team that shares the top spot in scoring with the Tampa Bay Buccaneers. Both have scored 103 points in three games.

Speaking of the Bucs, the reigning champs suffered their first defeat of the season last Sunday. Who beat them? The Rams did it! In front of more than 73,000 fans in LA, they outplayed Tom Brady and Co.

Can they keep on winning? Oddsmakers surely think so. They’ve made the Rams six-point favorites against the Cardinals.

All odds are per DraftKings as of September 27.

Kyler Murray vs The Rams’ Defense

Arizona’s third-year quarterback has been sensational so far in 2021. He’s third in passing yards, with 1,202 in three games. So far, he’s made 7 touchdown passes, as well as 3 rushing touchdowns. Still, there is a caveat – his team’s played against opponents that aren’t famous for great defending.

In Week 1, the Cardinals beat the Titans 38-13, the team that had the sixth-worst defense in the AFC last season. The Minnesota Vikings were their next rivals; we saw the Cards winning 34-33 in Glendale.

In Week 3, they went on the road again. This time, they played in Jacksonville against the Jaguars. The final score was 31-19 for the Cardinals, which didn’t come as much of a surprise, knowing that the Jags were the team with the worst defense in the conference in 2020.

In Week 4, the Cardinals are facing a much, much tougher opponent. In fact, the Rams defense is probably the very best in the entire league. Last season, they conceded only 292 points in 16 regular-season games, fewer than any other NFL team.

They haven’t started the new season too impressively, with 62 points conceded so far. Still, there is an explanation behind this – they had to play some pretty tough opponents.

Their Week 1 job was relatively easy. They beat the Chicago Bears 34-14 at home. In Week 2, they beat the Colts in Indianapolis 27-24. Then, in Week 3, they put on their best performance so far in the 2021 NFL season.

Last Sunday, we saw them beating the Buccaneers 34-24. The Rams’ defense was superb in that game, but the man they should thank for the win is their quarterback, Matt Stafford.

Matt Stafford to Keep on Impressing for the Rams?

Stafford might be the last piece of the puzzle the Rams needed to take the big leap forward. Last weekend, they did something they haven’t done in years – they beat the reigning NFL champion.

Against the Bucs, Matt Stafford was nothing short of brilliant. We saw him going 27-38 for 343 yards and 4 touchdowns. That was, by far, his best performance since joining the Rams, although, to be frank, he did great in the other two games as well.

Will he continue playing at the same level? Probably.

Pick: Rams to win and cover the spread; over should hit, as well.

A World-First Deal to Kickstart iGaming in Saskatchewan