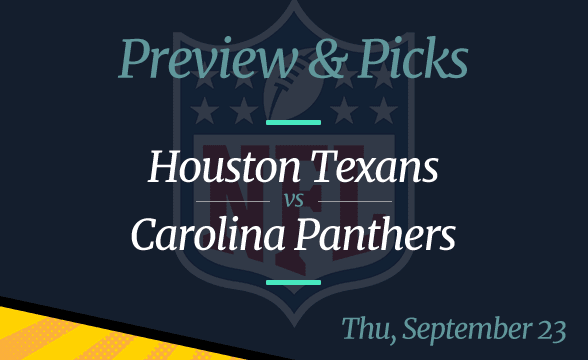 The Carolina Panthers are 2-0 in the 2021 NFL season and they want to keep it that way. Luckily for them, their next opponent is one of the worst teams in the NFL (if not the very worst), the Houston Texans.

Even though the Texans started their campaign with a win over the Jacksonville Jaguars at home, they lost to the Cleveland Browns in Week 2 on the road. They now return to Houston, where their fans will give them the boost they need, but will that be enough to cause an upset against favored Panthers? Let’s see!

All odds are per DraftKings as of September 20.

The Panthers should count themselves lucky for such a good start to the season. Their schedule has been pretty soft on them. In Week 1, they played against the New York Jets, and even though the visitors did put up a decent fight, the hosts got a 19-14 win in the end.

In Week 2, the Panthers welcomed the New Orleans Saints, who just aren’t as dangerous in the offense as they were in the Brees era. The Panthers had no problems beating them Sunday; the final score was 26-7.

Both of those games were played at Bank of America Stadium in Charlotte, with more than 70k people in the stands, most of whom were rooting for the Panthers. Now, the Panthers travel to Houston to play their first away game of the season.

Knowing that, in 2020, the Panthers went 3-5 on the road. Still, the fact is that those five defeats happened against teams much, much better than the Texans – Buccaneers, Packers, Vikings, Chiefs and Saints (with Brees as the QB).

Against the Texans, the McCaffrey will be on the field. Actually, he’s going to be their crucial man, judging by what he’s shown us so far. He’s already made 45 rushes for 170 yards and 1 touchdown.

Is There Any Hope for the Texans?

The short answer is no. The longer answer is that they will probably struggle a lot in 2021, the reason being that their roster is probably the weakest in the entire league.

Yes, that includes the Jaguars, the team that the Texans beat in Week 1. The Texans absolutely destroyed their defense in that game, scoring a total of 37 points. What’s really interesting is that we saw their new starting quarterback throwing two touchdown passes.

The man in question is Tyrod Taylor, the former backup for the LA Chargers. He could now be the starter for the Texans after their superstar QB, Deshaun Watson, is facing sexual misconduct charges that could see him dropped or suspended.

Taylor also did relatively well in Week 2 against the Browns, but this time, it wasn’t enough to bring his team another win. The chances are that the same scenario will follow in Week 3.

Pick: Panthers to win and cover the spread; we should also see 44 or more points in the game