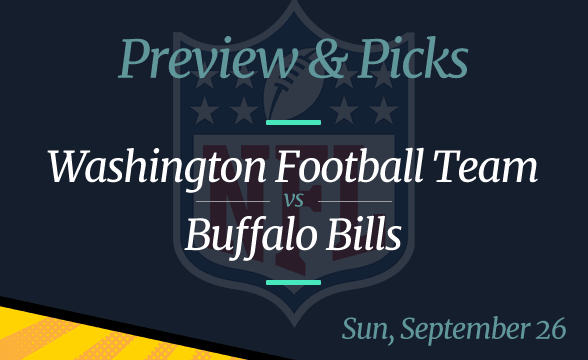 It wouldn’t be an exaggeration to say that the Buffalo Bills were sensational this weekend against the Miami Dolphins. In fact, their 35-0 win was the most dominant performance of the week in the entire NFL.

Can they keep their superb run going? Oddsmakers this so – the Bills are huge favorites against the Washington Football Team in Week 3. The reason isn’t just that the Bills are in on a fantastic run; it’s also because the game is played on their turf. They played at Orchard Park once already this season, but they didn’t impress their fans. Actually, they left them disappointed after losing to the Pittsburg Steelers 23-16 in Week 1.

Obviously, the Bills feel as if they need to recompensate their fans for the Week 1 loss, meaning that the WFT might be in trouble. Motivated Bills aren’t the kind of an opponent you’d wish to face, especially not in Buffalo.

All odds are per DraftKings as of September 20.

When the Bills offense is concerned, it’s usually all about Josh Allen sending precise passes toward receivers like Stefon Diggs or Cole Beasley. Against the Dolphins, however, the Bills’ strongest weapon was rushing.

Third-year running back Devin Singletary was superb, making 13 carries for 82 yards and 1 touchdown. If you thought that was impressive, wait to hear about second-year RB Zack Moss. The 23-year-old made eight carries for 26 yards, scoring two touchdowns along the way.

If you’re wondering how Josh Allen did in that game, he was okay. The quarterback went 17/33 for 179 yards and two touchdowns, with one interception. Against the Steelers in Week 1, he made one touchdown, which makes his 2021 record three passing TDs.

Should we expect more from him? Judging by what we saw from Allen in 2020, the answer is yes. The QB passed for career-high 37 touchdowns in the 16 regular-season games last year.

When Ryan Fitzpatrick injured his hip in Week 1, many thought a disaster would follow. However, WFT backup quarterback Taylor Heinicke proved to be more than a suitable replacement. This was especially true about his performance in Week 2 against the New York Giants.

In that game, Heinicke went 34/46 for 336 yards and two touchdowns, with one interception. Those are some pretty decent stats, but his good performance might also have something to do with the fact that he played against the Giants defense, which hasn’t been great since the start of the season.

On Sunday, the WFT are taking on the Bills, a team that conceded zero points this past weekend. The big question is can Heinicke and his teammates break the Buffalo defense? It’s very unlikely, and even if they did it, the Bills’ offense would make their efforts go to waste.

Pick: Buffalo Bills to win and cover the spread. If the current Over/Under doesn’t move, the Over should hit.

The Dana White’s Contender Series wasn’t immediately welcomed but seven weeks of successful high-class MMA has earned the format its good name and reputation. Now, we are heading into the Contender Series Week 8 on Tuesday and with this, we are keen to explore the numerous fighters who will try to earn a place in […]