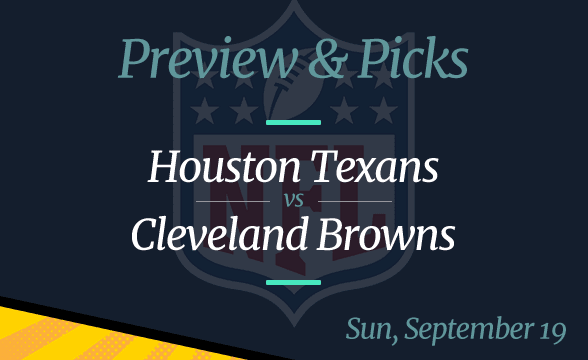 The Houston Texans beat the Jacksonville Jaguars in Week 1, despite entering the game as 4-point underdogs. Their offense had a wonderful game, which came as a surprise, considering that their play-caller was the ex-Chargers backup, Tyron Taylor.

Still, this might not have to do much with Taylor’s ball-throwing abilities; it might have to do more with the fact that the Jaguars were horrible in defense.

The bad news for the Texans is that, in Week 2, they’re taking on a team that has a much better defense than Jacksonville.

With Deshaun Watson being suspended indefinitely, the Texans’ starting quarterback is now Tyrod Taylor. The 32-year-old has been in the NFL for more than a decade, although he didn’t play too many games.

In fact, for most of his career, Taylor has been used as a backup quarterback. However, he’s now a starter, and so far, he seems like a good choice. In Week 1, he threw 21-for-33 for 291 yards and 22 touchdowns. The guy also did pretty well when rushing is concerned, carrying the ball four times for 40 yards.

Should we expect him to do something similar in Week 2? Probably not. The reason is that the Texans’ next opponent is a much better team than their Week 1 rival. In fact, the Jaguars are the team that went 1-15 last season.  The Browns, however, finished the 2020 season with 11-5.

Despite Losing, the Browns Did Okay in Week 1

There’s nothing to be embarrassed about for losing to the #1 Super Bowl favorites. In fact, the Browns should be proud of their performance against the Chiefs, who beat them 33-29 at Arrowhead Stadium.

Losing to Kansas City by just four points is something they can be proud of. However, there’s probably a feeling of disappointment in the Browns roster, knowing that they had a lead throughout the game. In fact, until 4:50 in the final quarter, they had a nine-point lead. Nevertheless, the performance from Week 1 has certainly given them the confidence that they can do much better in Week 2.

Actually, we’re expecting them to do very well in Week 2, especially when it comes to passing. Against Kansas, all of their TDs were scored through rushing. This time, we expect their QB to do better with his passing.

Sure, Baker Mayfield didn’t do badly in Week 1. Actually, it was just the opposite – he went 21/28 for 321 yards. However, none of his passes resulted in a touchdown.

Knowing that Mayfield recorded 26 passing touchdowns in the 16 regular-season games last year, it’s very likely we’ll see him winning some points on his own against the Texans.

Pick: The Cleveland Browns to win and cover the spread, and the Under hits.

At the end of July, Nevada Governor Steve Sisolak put his signature on an emergency directive requiring masks to be worn indoors. The directive was also aimed at Las Vegas casinos, according to the most up-to-date guidance from the Centers for Disease Control and Prevention at the time. Sisolak’s policy adviser Duane Young reinforced the […]

GAN Limited has revealed that it has completed the Ainsworth Game Technology Limited online gaming content to Churchill Downs Incorporated’s TwinSpires, through its dedicated SuperRGS aggregation platform.  GAN follows up on an earlier agreement with Ainsworth to obtain exclusive online rights over the latter’s online games. GAN’s acquisition of Ainsworth was motivated by the former’s desire to expand in the US […]

The Nevada Gaming Control Board contributed to a historical moment to the gambling industry in Las Vegas as it recommended a tribe from California to be the first one to have a casino when it purchases the Palms. The final approval will be in the hands of the Nevada Gaming Commission on December 16, but […]

Skill game producer Pace-O-Matic has reported an increase in the number of outlawed skill games offered in Virginia since the ban on skill game machines was imposed on July 1. Prior to being outlawed in the state, skill or “gray” games were a regular sight in many bars, restaurants, and convenience stores. However, they were operating in […]