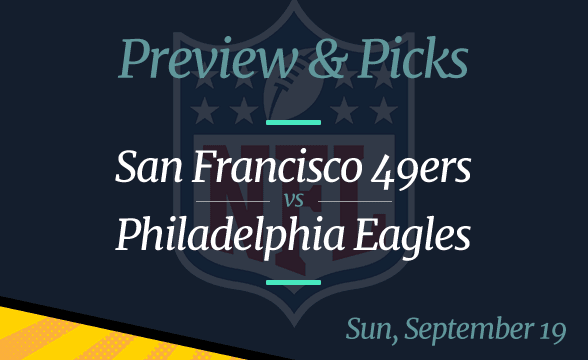 Both the San Francisco 49ers and the Philadelphia Eagles have started the new season with a win. The 49ers beat the Detroit Lions 41-33; the Eagles were even more impressive – they demolished the Atlanta Falcons 32-6.

Who’s going to win the 49ers vs Eagles game in Week 2? Let’s find out!

Can Jalen Hurts Lead the Eagles to Another Win?

Philadelphia’s second-year quarterback showed the NFL that his team was right to release Carson Wentz and put him in charge. Now a 23-year-old, Jalen Hurts started only four games last year, but in 2021, he’s going to be Philly’s main signal-caller.

In Week 1, we saw him going 27/35 for 264 and three touchdown passes to three different receivers. One of those was DeVonta Smith, Philadelphia’s rookie WR, who won the Heisman Trophy last year.

The Eagles fans obviously have nothing to worry about their team’s future. When their young guns get more experience, they’re going to become NFL’s elite. But, what until then?

They probably aren’t going to do much this season. In fact, oddsmakers think they aren’t going to get to the playoffs this season. Still, they also thought they were going to lose the Week 1 game to the Falcons. The Eagles entered that game as four-point underdogs. This time, the point spread is the same, but will we see them upsetting the odds again?

The 49ers Look Unbeatable at the Moment

Coming off a nightmare season, the 49ers started their 2021 campaign with a 41-33 win over the Detroit Lions. No surprise there, as San Francisco is one of the strongest teams in the NFC and one of the main candidates for winning the conference.

The reason for that is that all of their key men are back on the roster. Last season, it wasn’t the case. In fact, starting QB Jimmy Garoppolo played only three games last year. A similar thing happened with Nick Bosa, the man who won the 2019 Defensive rookie of the Year award. He played only two regular-season games last season.

Both of them have made their comeback to the 49ers roster. In Week 1, both were nothing short of superb. Garoppolo went 17/25 for 314 yards and one TD pass; Bosa made four tackles, as well as one sack.

We should see them continue playing at the same level in Week 2, which suggests the 49ers will grab another victory.

Pick: San Francisco 49ers to win and cover the spread. Based on the points these two teams put up in their respective first games – the Niners had 41 and the Eagles had 32 – taking the Over seems like a smart choice.