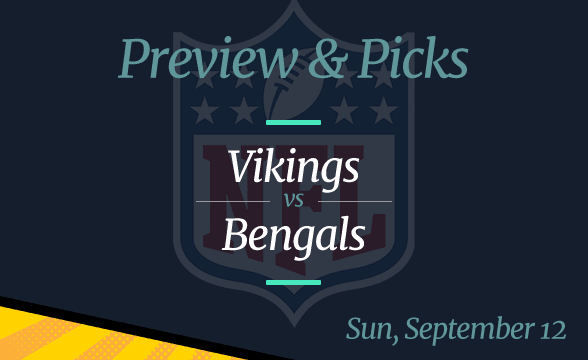 The Vikings will face the Bengals on September 12, 2021, in the first week of the 2021 NFL season. The last time the two teams played was in 2017, so undoubtedly an exciting game is ahead.

Vikings Play against Bengals on September 12

Vikings vs Bengals When and Where

Vikings Are Ready for the New Season

Named after the Vikings of ancient Scandinavia, the Minnesota Vikings are a professional team founded in 1960. The team’s first season was in 1961, and it currently holds an all-time overall record of 516-442-11. That winning record is, in fact, the highest when it comes to NFL franchises that have not won the Super Bowl.

Last season, the team was eliminated from the 2020 playoffs after losing a game against the New Orleans Saints on Christmas day. The Vikings’ record for last season was 7-9, while injuries on the defense contributed negatively.

Earlier this week, ESPN revealed that Vikings tight end Irv Smith Jr underwent surgery to repair a meniscus injury. Consequently, the Vikings’ coach, Mike Zimmer, did not reveal whether he would be able to return for this season. In that line of thought, a win against the Bengals during Week 1 of the 2021 NFL season will undoubtedly boost the Vikings’ confidence.

Focusing on the team’s performance during the 2020 NFL season, the Bengals had a 4-11-1 record. The new preseason found them beating last year’s Super Bowl champs, the Tampa Bay Buccaneers, but they have now lost to the Washington Football Team and the Miami Dolphins. One difficulty that the Bengals faced last year was the injury of quarterback Joe Burrow in Week 11 last season. On the bright side, Burrow is now back and he is undoubtedly going to be one of the key Bengals players this season.