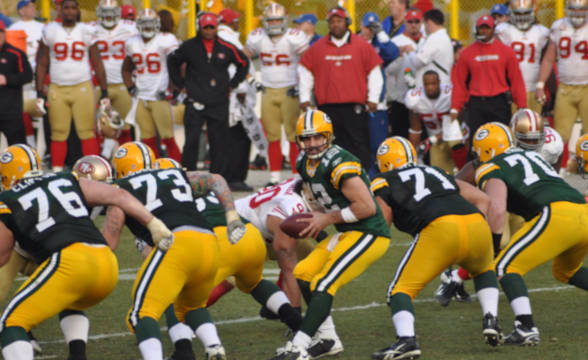 A couple of years ago, the New England Patriots vs Green Bay Packers game would be the matchups of the week. However, in 2022, it seems almost certain that the Packers are going to triumph. Oddsmakers agree, giving just -480 on Aaron Rodgers & Co.

Sure, the Packers are a great team, especially when playing in front of their crowd at Lambeau. However, the real reason why their odds are so short is that their opponents have serious problems with injuries. Actually, it’s just one problem, but it’s huge – quarterback Mac Jones will probably miss the Week 4 game due to an injury.

Can the Pats do anything without him? Some would say that they might as he hasn’t done much for their offense in 2022. Still, without him to call the signals, they don’t stand much of a chance against the talented defense of the Packers.

Brian Hoyer to Start for the Patriots

If Mac Jones doesn’t miraculously recover by Sunday, Brian Hoyer will start for the Patriots. The 36-year-old quarterback has been in the NFL since 2009, but he hasn’t played many games. In fact, he’s started only two games since 2017.

There’s a reason why he’s not the starter when Jones is around – Hoyer just isn’t an elite-level quarterback. Does this mean the Patriots are in trouble? It does, especially knowing that the Packers have been great in the defense in 2022.

Plus, if you take a look at the head-to-head stats between the New England Patriots and Green Bay Packers, you’ll see that the Pats offense didn’t do great against this team even when Tom Brady was there to lead them. This goes especially for the games played in Wisconsin. For example, the last time they played at Lambeau, the hosts beat them 26-21.

Last season, the Green Bay Packers won every single regular-season game played at Lambeau Field. The biggest stadium in the NFL is the place where they lost just one game the season before. It happened against the Tampa Bay Buccaneers, who went on to win the Super Bowl the same season.

What all this means is that even if Mac Jones was playing for the Patriots, they’d still be seen as huge underdogs against the Packers at Lambeau. Without him, they might be heading for a disaster.

It’s not just that the Packers love playing in front of their crowd, but they also look pretty good at the moment. After a disappointing start to the season, they won back-to-back games, with their offense finally starting to show signs of improvement.

Even though Aaron Rodgers and his teammates have scored just 48 points in the three games of the 2022 season, they did do well in crucial moments of their most recent game. What we’re talking about is Rodgers’ two excellent TD passes against the Bucs, which helped the Packers win 14-12.

Not only are the Packers superior to the Patriots in the offense, but they’ve also been great defensively in 2022. Knowing that they’ve allowed just 45 points so far (15 per game on average), it’s only logical to assume that Jones-less Packers aren’t going to score much against them on Sunday.